A global checklist of concise, probing questions pertinent to the future of Buddhism. This article was published July 2010 on the Patheos.com website. 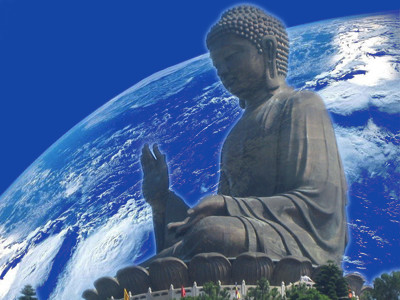 Buddhism is spreading to new places. This presents new challenges and opportunities.

With the globalization of humanity, countries where Buddhism has existed for centuries are changing, and Buddhism is also spreading to new places. This presents new challenges and opportunities for various segments of the worldwide community of Buddhist practitioners—Asian Buddhists living in Asia, Asian Buddhists living in the West, Westerner Buddhists. While each group faces some unique challenges, many challenges are similar though they may play out differently depending on the culture where those Buddhists reside. The challenges and opportunities for Buddhism in the 21st century are huge, and a lengthy essay could be written on each of them. Therefore I will only outline some of the major ones here.

How will Buddhism and Buddhists interact with science and how will they influence each other? Will they continue to be seen as separate disciplines or will people try to merge them? Will people look to science to prove Buddhist assertions or look to Buddhism to expand on what science knows?

How will Buddhism interact with psychology? How will psychology’s perspective that operates only within the framework of this life influence Buddhist practitioners who seek good rebirths, liberation, and full enlightenment, which exist in a framework that involves rebirth? Will people psychoanalyze themselves on their meditation cushions?

What will Buddhism’s role be in creating interfaith dialogue and harmony? How will Buddhists interact with and stand their ground with people from other religions who stridently try to convert them?

How will traditional Buddhist societies in Asia pass the Dharma onto their children, many of whom are tantalized by new consumer products and who now have more choices in life than their parents?

How will ethnic Buddhists in the West pass Buddha’s teachings onto their children who are Westernized and feel more comfortable speaking English, French, etc., than the language of their parents?

How will Buddhists relate to the consumer mentality in the West? Will Buddhism be another consumer item that teachers market in order to become famous and make a living? To what extent will Dharma students “go shopping” for the teacher and teaching that please their self-centeredness the most? Will teachers alter the teachings—omitting topics such as unfortunate realms of rebirth—that are unpopular in order to draw more students?

What will the role of monastics be? Traditionally it has been to study and meditate in order to preserve and teach the Buddha’s teachings, but now university professors do much of the modern Buddhist scholarship, and many Western Dharma teachers are lay practitioners. Will monastics and their lifestyle be marginalized due to the emphasis on sensual pleasures and wealth in modern cultures? What will happen to the Dharma if the sangha’s model of a simple lifestyle, sensual restraint, and ethical conduct is ignored or denigrated?

Many Dharma centers for Westerners charge for teachings, retreats, and so forth. It would be unfortunate if Dharma were available only to those who can afford it. How can we educate people on the joy and virtue of generosity so that centers can be supported by donations and no one is turned away due to lack of funds? Would the board of directors of a center even want that?

In the past, lay followers supported the sangha, who lived a simple lifestyle and used the money to build temples where the lay followers could go. Lay Dharma teachers have families to support, a mortgage and insurance to pay, children to educate and send to summer camp, etc. Is it the role of Dharma students to cover all these expenses?

How many young men and women in Asia will seek ordination so that the monastic system there, and all the good it does for the teachings and for society, will be sustained? Will more Westerners ordain and establish monasteries in the West? To what extent will lay followers see the value of monastics and monasteries and choose to support them?

Realized beings come from people who put in the time, energy, fortitude, and perseverance necessary to study, reflect, and meditate in order to gain realizations of the path. Will modern society have people who wish to do this? Where will they go and who will support them?

How do we guard against false teachers?

What conditions will enable people from different Buddhist traditions to get to know each other better, to cooperate more, and to respect each other more?

Not all countries or Buddhist traditions have full ordination for women. How can this be brought about?

It would benefit Buddhist communities to be more inclusive of women in positions of leadership. How can we support this?

To what extent should monastics and lay practitioners be involved in social welfare projects? While encouraging Buddhists who are so inclined to do this, how can they maintain balance in their lives and avoid burn-out?