The Buddhist group at a prison in Washington State hosted a Buddha Fest. Buddhist volunteers and teachers were invited to join the special occasion. About 35 inmates (some who had been practicing for years, others who were new to the Dharma) planned, organized, and participated in the festivities. The day included meditation, talks about the noble eightfold path, and small group discussions that enabled the men to talk about what was of concern to them.

"I grew up in the inner city. Fighting was normal—that’s what happened and that’s how you won respect. It’s the same in prison. You’re respected if you’re tough. If you back away from a fight, you’re seen as weak. So I fought when necessary, and when I trounced someone who was in my face, I felt a sense of satisfaction. One thing I wouldn’t tolerate, though, was being hit in the eye. That would be too much. I thought that if someone ever hit me in the eye I would kill him." Thus spoke the big man sitting across from me in a discussion group during the Buddha Fest in a prison. The Buddha Fest was a once-a-year event, cherished by the men, a time when they could meet several visiting Buddhist teachers and speak with them for a good part of the day.

The other men in the discussion group nodded in understanding at this man’s statement. They all knew prison was a rough place where circumstances could pressure someone into a fight he didn’t want to participate in.

"I wonder what it is in us that gets satisfaction by beating someone up?" I queried.

"You get your way," said one inmate.

"You protect yourself," added another.

"You prove to him and everyone else that no one can take advantage of you," contributed a third.

I reframed the question, "That’s true, but what in us takes pleasure at harming another living being?"

Silence. The reality hit of what violence does not only to the victim but also to the perpetrator. 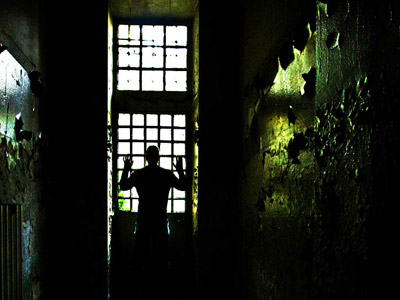 My choice not to fight is made not out of weakness but out of strength, and they know it. And this isn’t physical strength, but mental strength. (Photo by Luca Rossato)

"In looking inside myself," I commented, "I see it could have to do with gaining a sense of power. When someone hits on us, verbally or physically, first we feel helpless and powerless. That’s a really uncomfortable feeling. No one likes to feel powerless. So to mask it, we get angry, our hormones start pumping. There’s a strong sense of “I” and we feel “I can do something!” That creates an illusory feeling of having power."

The guys took it in. Then the first man went on with his story, "So one day this dude jumped me and slugged me in the eye. I had a huge eye, big like this," he motioned with his hand. "So I waited and I planned my revenge. The other guys around me kept asking when I was going to get him. But after a while I began to think, ‘Hey if I beat on this guy, they’ll throw me in the hole [ed: solitary confinement for punishment] and I’ll wind up staying in this place longer.’ I don’t want that."

I was surprised. Usually the threat of punishment doesn’t mean much to people who have nothing to lose. But he was onto something.

He continued, "I started asking some of the other guys in my cell block if they’d ever been in fights. I was astonished when some of them replied, ‘No.’ That was new for me. Someone who had never fought. I found myself respecting those guys. So I thought some more about it and realized that I had a choice whether to fight or not. I’m big; other guys know I could fight. But if I choose not to because I know that it doesn’t bring anything good, then without my saying anything, they will know that I’m not letting myself be taken advantage of. My choice not to fight is made not out of weakness but out of strength, and they know it. And this isn’t physical strength, but mental strength."

This man had certainly won my respect.