Excerpt of a 2005 speech by His Holiness the Dalai Lama, sent by the Tibetan Nuns’ Project, in Tibetan (2 pages), to the Department of Religion and Culture in December 2005. 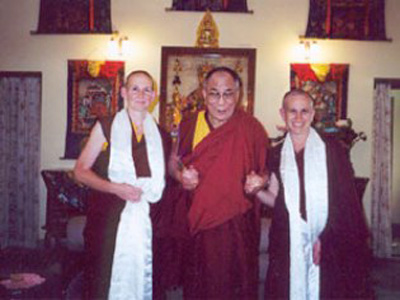 Nuns and bhikshunis belong to [the group of] most important [people] who will be making decisions. (Photo by Sravasti Abbey.)

Another point is: although in the past we have had a lot of discussions on the bhikshuni [issue], up till now it has not yet been resolved. In any case, it needs to be completed. It is not something that we Tibetans can resolve on our own. It needs to be resolved commonly by Buddhist countries in this world. Speaking in general, this world has reached the 21st century, and if the Blessed One would live today, I think, He would set up some of the rules differently in accordance with the actual state of affairs nowadays. Although we Tibetans do not alone have the responsibility for [the maintenance of] Buddhism, we happen to be an important [group] among those who have the responsibility. In general there are many Holders of the Vinaya in Taiwan, Sri Lanka, Burma, Korea, Japan, China, etc. and a great size of ordained community (sangha). There are also nuns and bhikshunis. They belong to [the group of] most important [people] who will be making decisions. There is no way that we Tibetans make a decision on our own.

Nonetheless, in an eventual case of [our] participation in a symposium with an international character, it is imperative that we are able to present a complete and systematic proposal consisting of the results of the deliberations that we Tibetans have made thus far by stating that such and such are the results of our deliberations.

I, therefore, ask myself whether it would not be good, if we managed to compile a neat document [based on the hitherto] unfinished [deliberations], and be able to contact and discuss with [other] Buddhist countries.

In addition, one of our successes is that many scholastic seminaries (bshad grwa) have been established in many of the nunneries within our [communities], and [nuns] are now studying, and progress is being made in [their] studies.

It has been discussed several years ago that we should gradually allow the nuns to become geshe-ma (“female geshes”) after they have studied and passed the [geshe] examinations in whatever two or three fields (lit. ‘treatises’) they have specialized (lit. ‘studied’). [The logic had been that] if we can have gelong-ma (bhikshuni), we can also have geshe-ma.

These points need to be discussed with the Department of Religion and Culture1 and need to be fixed in writing.

There are not only nunneries [among] us Tibetans, but several exist also [in other areas of Tibetan culture] from Ladakh in the West all the way to Mon [i.e. Arunachal Pradesh] in the East. In general, [the tradition of nuns is] not limited to Buddhist [culture] alone, but can be found in several [other] countries.

For example, look at the Christian churches. The majority of those who visit Christian churches are women. I haven’t paid much attention to Muslim [tradition]. At any rate, [also in] Buddhist areas in the Himalayan region, women seem to have greater religious faith. Nunneries are [thus] becoming [increasingly] important. Accordingly, it will be ideal if the quality of studies directly corresponds with the increase [in the importance of nunneries], and if the lineage of the fully ordained nuns (bhikshuni) can be established in the course of time.

We have a new opportunity while being in exile. If we can, by making use of this new opportunity, draw up a new and good model through discussion and the best possible brainstorming, there will also be a good model when we return to Tibet. This is a crucial point. We will also probably have the chance to set a model within China via Tibet. We also need to deliberate on this issue.

As for the matters concerning the method of studies, if the scheme devised for the Gelug monasteries; and likewise if the scheme devised for nuns become efficient, certain aspects of those will prevail not just in the Gelug [tradition] but also in the Sakya, Kagyu, Nyingma, and Bon [traditions]. If this happens, all leaders of the various religious schools [should] assemble from time to time for deliberation and resolution, and [should be able to] deliberate and decide.

Therefore, if we first create a good internal draft of the plan on our side, we all could, headed by Sakya Dagri Rinpoche, deliberate and decide collectively. If this happens, the standard of discipline (or training) and studies of all those who are called mKhan­po (upadhyaya) and sLob­dpon (acarya) in Sakya, Gelug, Kagyu and Nyingma, regardless [of their school affiliations], will arrive at a fixed standard. And also those mKhan­pos who visit foreign lands will be qualified [teachers] who conform their designations (or titles).

Therefore, if one is a Gelugpa, [he or she] should accordingly see to it that training and studies are not neglected. And since the designation of as geshe, [one should be worthy of the title], and not [live up to] the standard of the “Dalhousie Geshe” which has been previously set. There are various kinds of geshe, [such as] senior and junior. In the case of a senior [geshe], someone who should be designated as such must be a person who is worthy of a senior geshe in terms of [his or her] learning and adequately meets the standard of learning. One who does not adequately meet the standard of learning will have to be given only the title of a junior geshe. Someone who has not studied should not be given a geshe title. These [standards] have to correspond with the actual state of affairs, and if we proceed in a haphazard manner, [the system of learning] will not become tidy in the future. I thought I should tell this [today].