Venerable Thubten Chodron about K. S.: “He was imprisoned at age 20 for a violent crime and has been in for about 10 years now. He had a quick temper, and was often involved in fights. He and I had many discussions about the necessity to fight when someone was in your face. He insisted that it was imperative, otherwise he would be continuously taken advantage of. I maintained that we could maintain our sense of dignity and strength while refusing to get drawn into a fight.”

What a time it’s been practicing patience with my old cellie! At first I thought we were like two peas in a pod, but I quickly learned that while our beliefs superficially appeared to be the same, they weren’t. What I considered to be an extreme view was actually his belief. Secondly, he is almost 60 years old and has been locked up since he was 17, with only a very brief three years out.

Our interesting practice of patience and understanding didn’t so much come from our relationship, but from what he had heard from other people about my less than peaceful past. So instantly he had a hard time reconciling what people told him about me (stabbings and fights) and what he saw (me sitting there). This all came to a head one day when, out of the blue, he announced he wasn’t afraid of me. That’s strange to announce to anyone, even in prison. I told him, “Good! You have no reason to be.” I’m not sure what he thought I said or how I meant it, but he took it totally the wrong way. He jumped up and demanded to fight. I just told him, “No.” Why would I fight a 60-year-old man who was apparently in a permanently altered mental state?

This happened on and off again for as long as I was in the cell. But there is more to the story. While I was in the cell with him, I saw him worry himself silly about people trying to take advantage of him. I watched as he hated everything and everyone. I even saw his wife leave him after 17 years of marriage. He worried what the parole board would say, where he would go when he got out, and all this. 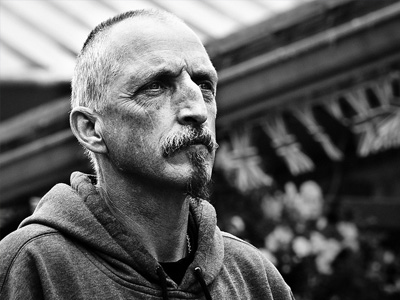 I saw someone who was coming to the end of his life racked with hate and misery, trying desperately to figure out what it had all meant. (Photo by Neil Moralee

I saw someone who was coming to the end of his life racked with hate and misery, trying desperately to figure out what it had all meant. It broke my heart. It wasn’t easy to live with, but it was much easier for me to deal with than for him. When he wanted to talk, I listened. When he wanted to fight, I laughed, and towards the end he’d laugh too and sit back down. Every now and then when he sees me in the yard, he always yells my name and waves, and I wave back.

Towards the end it became easier to cope with, but it was just so terrible seeing another human being like that. It was definitely a study in suffering. But at the beginning it was a practice of patience. Not with him, but with myself, because I had to learn to rethink what I thought.

I wouldn’t like something, but he would hate it. I never backed down, and he wanted to fight. He challenged my every thought just by breathing. He showed me how my snap judgments about others often led to something I didn’t want. I learned that I don’t have to have an opinion about everything. He showed me that just because someone challenges you, you don’t have to trounce him. And what would I have looked like beating up an old man over nothing?

My opinions aren’t that important to me any more. I don’t have to defend my turf like a rabid wolf. It is okay to just shrug and smile. I learned all that from a man everyone around me calls psychotic.

I don’t know if that would work for everybody but it works for me. I’ve been whooped and I’ve whooped others, and the wheel of whoopings just keeps turning. It’s boring and I’m tired. I’m not saying I’ll never fight again, but whew, I’ll sure be disappointed if I do.

So yeah, you’re right. I think my practice was at a plateau, but looking back at how far I’ve come, I feel like I’m standing on a peak right now. So I’ll just keep going.

Life force and the four elements
On the backdrop of time