Photos from early years as a monastic and after founding Sravasti Abbey. Photos galore of life at Sravasti Abbey can be found here. 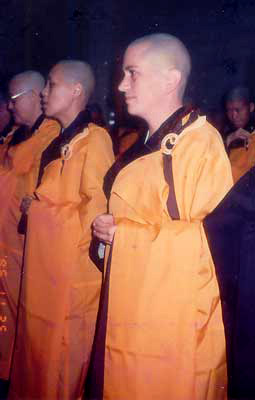 Venerable Chodron at her bhikshuni ordination in Taiwan, 1986. 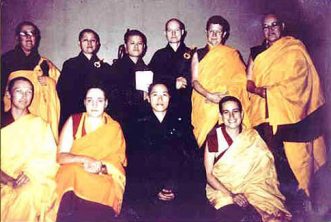 The first Sakyadhita – ‘Daughters of Sakyamuni Buddha’ – conference was in Bodhgaya in February, 1987. This brought together more than ten bhikshunis – most from Taiwan and the USA – who could do the Bhikshuni Posadha, where this photo was taken. 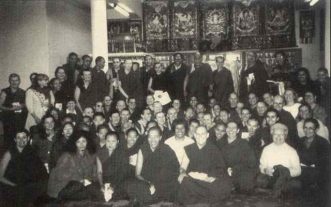 More than 80 participants attended the ‘Life As A Western Buddhist Nun’ program. Many of them met with His Holiness the Dalai Lama in Dharamsala after the event. 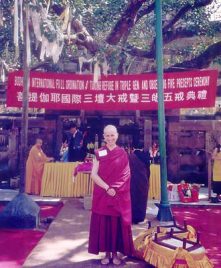 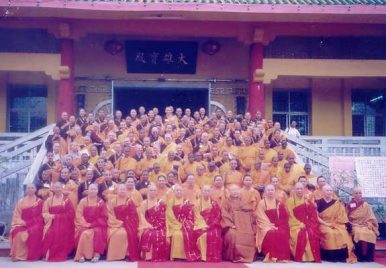 The newly ordained bhishunis with the 12-member bhikshuni sangha who gave the ordination. 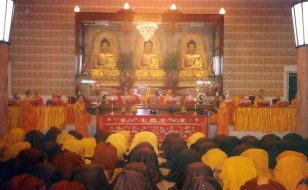 The ordination ceremony. Venerable Chodron is seated on the far left. 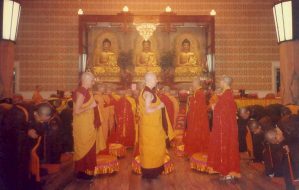 The ordination ceremony is held at the Chinese temple in Bodhgaya.

In November, 2001, Venerable Chodron was invited by Geshe Damdul, principal of the monastic school at Drepung Loseling Monastery, to give a talk to the monks there on ‘The Similarities and Differences among the Various Buddhist Traditions’, as well as about the Abbey project. 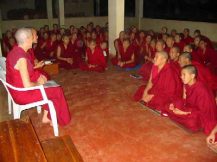 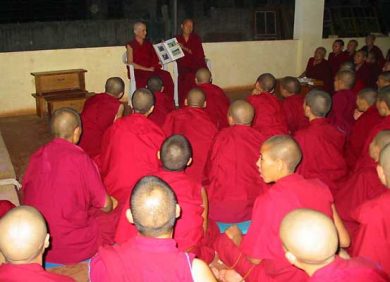 Venerable Chodron shared stories and photographs of the Abbey with the nuns. 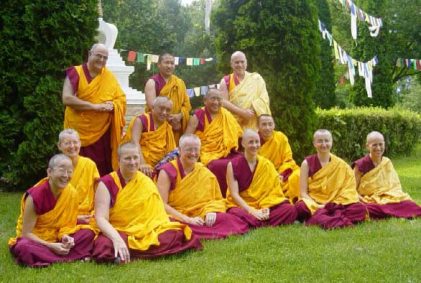 At the direction of one of her Tibetan lamas, Venerable Chodron visited Thailand in October, 2005, to learn more about the Dharma as practiced in the Theravada tradition. She stayed about two weeks at Wat Marp Jan, a monastery in the jungle of southern Thailand, where she received teachings on the four foundations of mindfulness from Ajahn Anand. 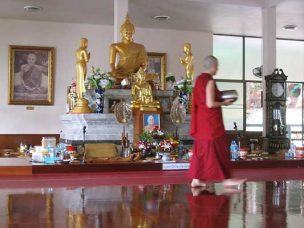 Venerable Chodron, holding her alms bowl, walks across the sala, where the monastics eat their one meal each day. 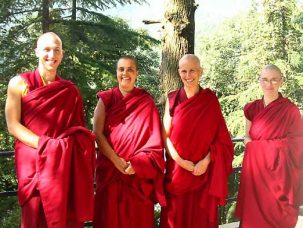 After a sangha lunch at Tushita Meditation Centre, India in October, 2005, where Venerable Chodron shared her experiences with the junior Sangha. 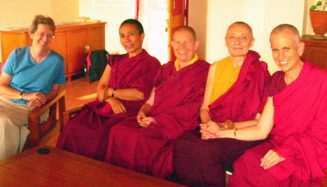 October, 2005 – From left to right: Dr. Betsy Napper, Venerables Lobsang Dechen, Tenzin Dolma, Tenzin Palmo, and Venerable Chodron, after a meeting at Dolma Ling Nunnery in which they discussed the possibility of introducing the lineage for full ordination of women into the Tibetan tradition. 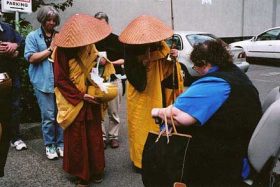 When Venerable Chodron was in Portland at the end of June, 2006, she participated in alms rounds with the Buddhist Priory Reverend Meiko, as well as two other monastics. They were well received by the residents and business owners in southeast Portland.

Venerable Chodron is a regular participant of the annual Western Buddhist Monastic Conference. The 12th Conference was held at Bhavana Society, West Virginia in 2006. 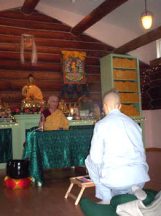 November, 2005 – Jan Howell, a full time resident at the Abbey, is the first person to begin training for ordination. Venerable Chodron led a beautiful ceremony explaining the eight precepts plus celibacy for life Jan was about to take and how significant it was for Jan, the Abbey, and all sentient beings. 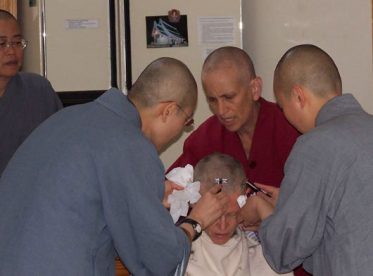 Jan gets her head shaved by the bhikshunis to represent her letting go of attachment.

The Committee of Western Bhikshunis met at Sravasti Abbey to discuss how to help His Holiness the Dalai Lama in his wish to establish full ordination for women in the Tibetan tradition. Together, the four bhiksunis totaled about 120 years in ordination! 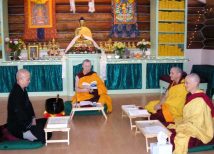 The first Posadha (Sojong) at the Abbey in which the Sangha confesses and restores their precepts. Holding this essential monastic ceremony is tremendously auspicious for the Abbey and establishes it as a place for monastics.

A bhikshuni sangha after their Posadha ceremony. 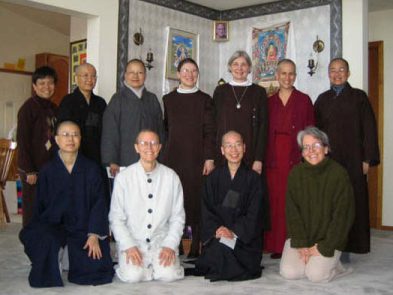 Five Taiwanese Bhikshunis – two from Chi Yuan Temple (American Evergreen Buddhist Association) in Kirkland, WA and two visiting from The Enlightenment Temple in Atlanta – and two neighboring Carmelite nuns came for a visit to the Abbey. 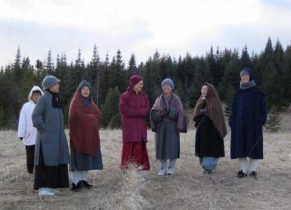 A frosty morning tour of the Abbey grounds. 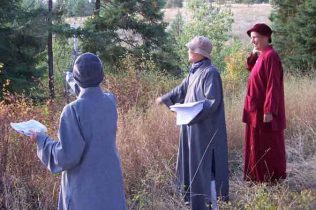 Because the Abbey land is so large, there were discussions on the size of the boundary. 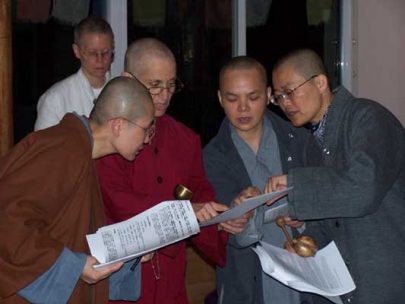 The night before the ceremony, finer details in the translation were still being worked out. 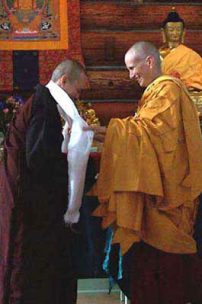 The Abbey gave the visiting Bhikshunis tokens of gratitude for their wonderful care and support during this historical moment at Sravasti Abbey. Venerable Chodron presents to Venerable Vinaya (Chanlu). 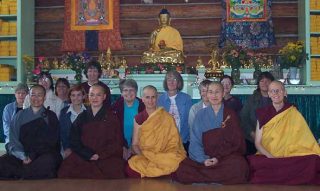 All the fortunate people who supported, witnessed and participated in making the first ordination at Sravasti Abbey a success gather for a group photo. 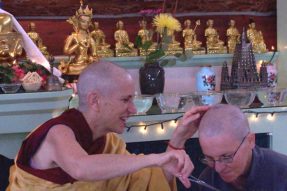 At the end of November, 2006, Nanc takes her Anagarika vows. ‘Anagarika’ means one who is leaving the home life for the homeless life, the life of the religious seeker. Here, Venerable snips off the last tuft of hair, symbolic of cutting off delusion.