Maitripa College: One Teacher, Many Traditions: Buddhisms in Dialogue Symposium 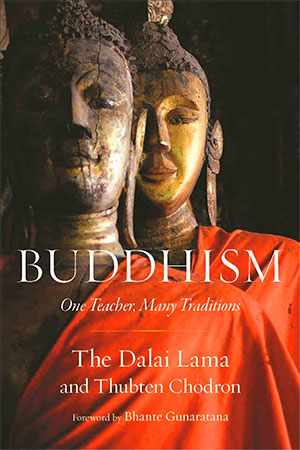 Following the release of the Dalai Lama’s Buddhism: One Teacher, Many Traditions, co-author Venerable Thubten Chodron will engage in a weekend of dialogue and meditations with Bhante Seelawimala exploring Buddhism’s diversity and unifying values, hosted by Maitripa College.

Siddhartha’s Enlightenment and teaching of the dharma in India 2,500 years ago originated what has grown into a religion with over 500 million adherents worldwide. For hundreds of years in countries across Asia, people have studied Buddhist philosophy and practiced meditation and rituals that have evolved into distinctive lineages, representatives of which brought Buddhism to the West in the twentieth century. Once fairly isolated from each other’s monastic communities and teachers, contact between various Buddhists is now inevitable in global modernity, and dialogue more critical than ever before. What do these traditions believe about each other? What are their doctrinal commonalities, and how do lineages diverge and offer unique contributions to the Buddhisms that can be encountered today?

In this weekend symposium, join two preeminent Buddhist teachers, Venerable Thubten Chodron and Bhante Seelawimala, for presentations, discussions, and guided meditations exploring fundamental Buddhist topics from the perspectives of two different major traditions. The spread of the Buddha’s teachings from India to Sri Lanka and southeast Asia formed the Theravada branch with a canon based on Pali language sutras, while the later spread of Buddhism north to China, Korea, Japan, and Tibet was based upon Sanskrit language sutras and the Indian and indigenous commentaries upon them, forming the Mahayana branch of Buddhism.