You are here: Home > Timeless Wisdom: Being the Knowing 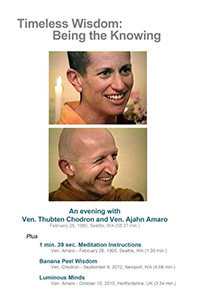 In 1995, Ajahn Amaro from Amaravati Monastery in the UK and Venerable Thubten Chodron gave a talk together entitled Timeless Wisdom: Being the Knowing. They discuss Buddhist meditation and philosophy, and also relate how they found their way to Buddhism and monastic life.

Both Venerable Chodron and Venerable Amaro are heads of their own monasteries, have lectured and taught around the world, and have published many books. This talk, along with some recent short teachings, is now available on DVD.

The main video was shot on February 28, 1995, in Seattle, Washington, and was originally released on VHS. It is now available on DVD, along with three other short videos of their teachings. Further, English subtitles may be accessed via your remote control.

An excerpt from the video

Timeless Wisdom: Being the Knowing