We’ve been talking about speech and how we use our speech. We finished the four. Now to talk about the three mental nonvirtues, how we use our mind in a way to create a lot of causes for trouble.

The first mental one is coveting. I know I had trouble with that word. It’s a biblical word, isn’t it? And I always have some kind of trouble with those words. What it basically means is you’re here looking at something somebody else has going, “I wonder how I can get that. Wouldn’t it be nice if I had that. I deserve it more than they do.” It could be coveting any number of things: some kind of material possession (they have nicer shoes than we do), we want their shoes, we want their car.

This is one mental action that our culture deliberately tries to cultivate in us. This is the purpose of having people go window-shopping, so they desire objects that are not theirs and then go buy them. It might not be total covetousness, in that the stores want you to do that. But still, it’s the same state of mind of looking around and, “What nice things are there? Oh, I like this, how about that? How can I get it?”

I remember Geshe Jampa Tegchok, when I would go to visit him, he often talked about this one to the sangha because he would say, you go into somebody’s house (for a cup of tea or whatever) and then you start looking at all the stuff on their walls, and admiring all the knick-knacks, and looking at the books they have, looking at the color they painted the walls, the kind of carpeting (“this rug is so nice!”), picking up things in their house and admiring them. And while many people may be flattered that people are in their house picking up all their stuff, admiring it, some people may not like it. Regardless, in our mind there’s a lot of desire going on, and kind of planning, “Hmmm, I wonder how I could say things in the certain way so that this person would give it to me.” Kind of, “How can I talk somebody into giving this to me.”

This is the mental one that happens without saying or doing anything, just in our mind. But then it leads to actions of speech: we flatter people, we hint, we give them a small gift so they’ll give us a larger one, we ask if we can borrow something and then we don’t return it, or we ask them, “Where did you get that?” (hint, hint, hint, “I could use one too, buy one for me.”) You know all these things we do, I don’t have to tell you so much. We’re very good at acting out our coveting wishes. [laughter]

This mental state is not very good for us. These ten nonvirtues apply to everybody, not just monastics, but especially as monastics they’re not good for us. But for everybody in general, too, because it can lead to stealing people’s stuff, it can lead to all sorts of things because we’re desiring their things.

It could probably also be extended to wanting their opportunities. People have certain advantages and opportunities so we try and ingratiate ourselves so that we can have those same opportunities or meet those same people, so that leads into a lot of actions done with kind of a rotten motivation, wouldn’t you say so? So that’s coveting.

The second mental one is sometimes translated as “ill will,” and sometimes as “malice.” What this is is a mind (and we do this one a whole lot) a mind just thinking how we’re going to get even with somebody who hurt us. You know how we do it? How we plot it out. We think of what that person did, and how mad we are, and then we think of situations we could meet them in and exactly how we can say something that would hurt their feelings. Or how we could talk to somebody else about what they did and ruin their reputation and divide their friendships. So again, it’s all mental, but it’s malice, just planning how to harm somebody else. You can do a whole meditation session on it. I’m sure many of us have. Sit down, the whole session….Well, half the session may be in coveting, and half the session is malice. And at the end you fall asleep. Meditation at the Abbey. [laughter]

We have to be quite careful of these kinds of things because they really stir up the mind and they act as the causes for us to speak and do things that create a lot of destructive energy, that harm people directly and that make us unhappy and put the seeds in our own mind for future suffering.

These kinds of wrong views really inhibit us from living an ethical life and making use of our incredible human potential.

All three of these are mental. Don’t have to say one word. So it’s good to keep checking our mind to see if these arise, and if they do to apply the antidotes, and then to make sure that we don’t lead other people according to our coveting, and malice, and wrong views.

Audience: Malice and ill will, I’m sure I have those because they are prevalent afflictions, but it never comes out they way. I don’t go to revenge or retaliation. I’m more of a “retreater.” It seems like those are for people who “go hot” with anger. I “go cold” with anger. I alway go away from things. I retreat.

Venerable Thubten Chodron (VTC): So you’re a “cold with anger” not a “hot with anger” person. But still, you ruminate. The rumination that cultivates this angry attitude is the same. Or it doesn’t come out as getting back at them actively, but we get back at them by withdrawing. Then there’s no chance for communication. They may want to talk with us, they may want to work it out, we’re 500 miles away mentally.

Audience: One thing that I do is I wish something happens to them. That’s where I go. It’s horrible, but I watch my mind sometimes and [inaudible]

VTC: Yes, okay. When we talk about ill will, it’s not so much that I’m planning my revenge. That may be it. But ill will is basically wanting something bad to happen to somebody else. Not that we necessarily have to do it, but wouldn’t it be nice if….blah blah blah blah….. And we like putting it as something that we don’t hold responsibility for even though it mentally “Gee, it would be so nice if they had a little bit a taste of their own medicine.”

[In response to audience] Oh yes, that they’ve created the karma for. And may they learn from this and develop compassion. So may it be good for them in the long run.

Yes, Dharma as a weapon.

Audience: I’m always amazed at how subtle the forms of these afflictions can be. You think you’re making progress. You go, “Well, I don’t, I’m not that active about these things.” But then there’s just this subtle residue of not actively wishing them ill will, but … they don’t get to the teaching on time, and they have to sit in the back, and you go…. [laughter] So subtle!

VTC: Subtle ways of manipulating to get what we want, and wishing harm on others, yes.

It’s really nasty when you recognize it, isn’t it? Feeling bad inside becomes a good motivation to let go of it. It’s like, I don’t want to be the kind of person that thinks like that. Or feels like that.

VTC: Okay, here we’re just talking about the three mental ones, but in terms of our levels of precepts to break a pratimoksha precept it has to be a physical or verbal action. To break certain bodhisattva precepts and certain tantric precepts you can transgress it by just the mental action. And then in terms of purification you do any purification method that you have. The important thing is trying to be aware of what the actions are that you want to purify. It isn’t like “I want to purify this but I did that…. Oh, I did the wrong purification practice. Oh I didn’t purify anything, totally wasted….” No. don’t worry about it. Whatever purification you do is going to help. 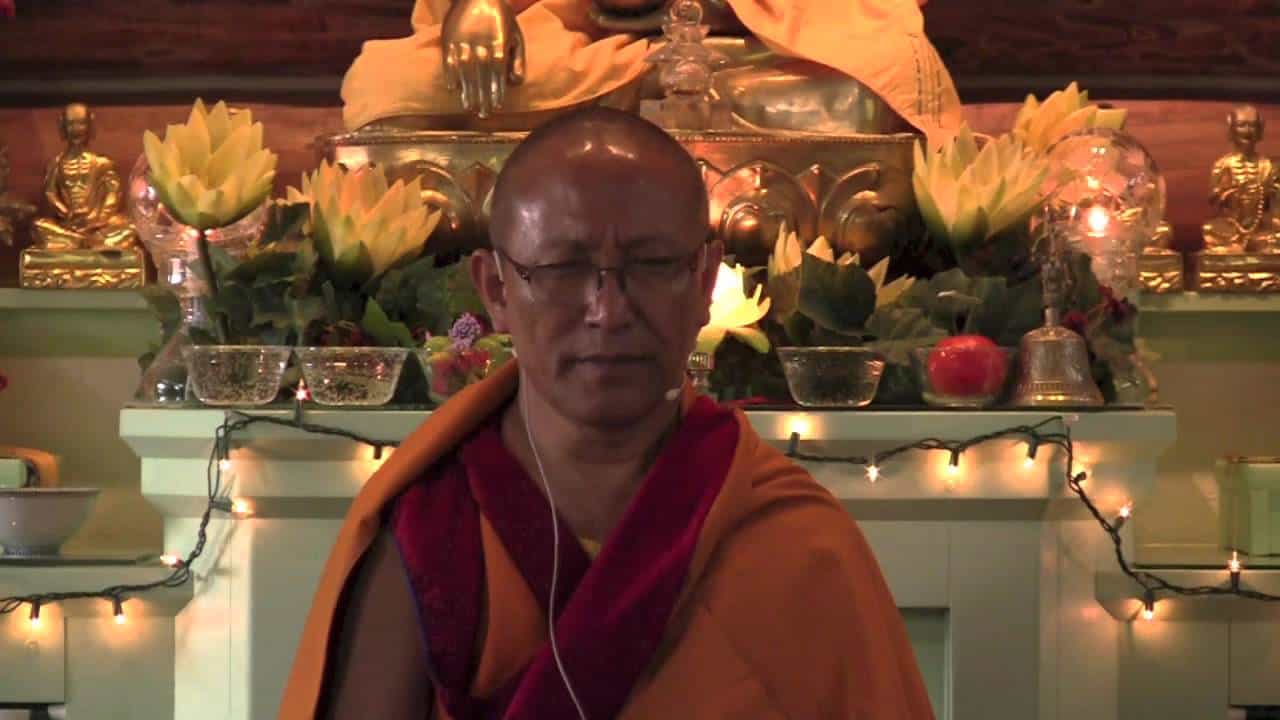 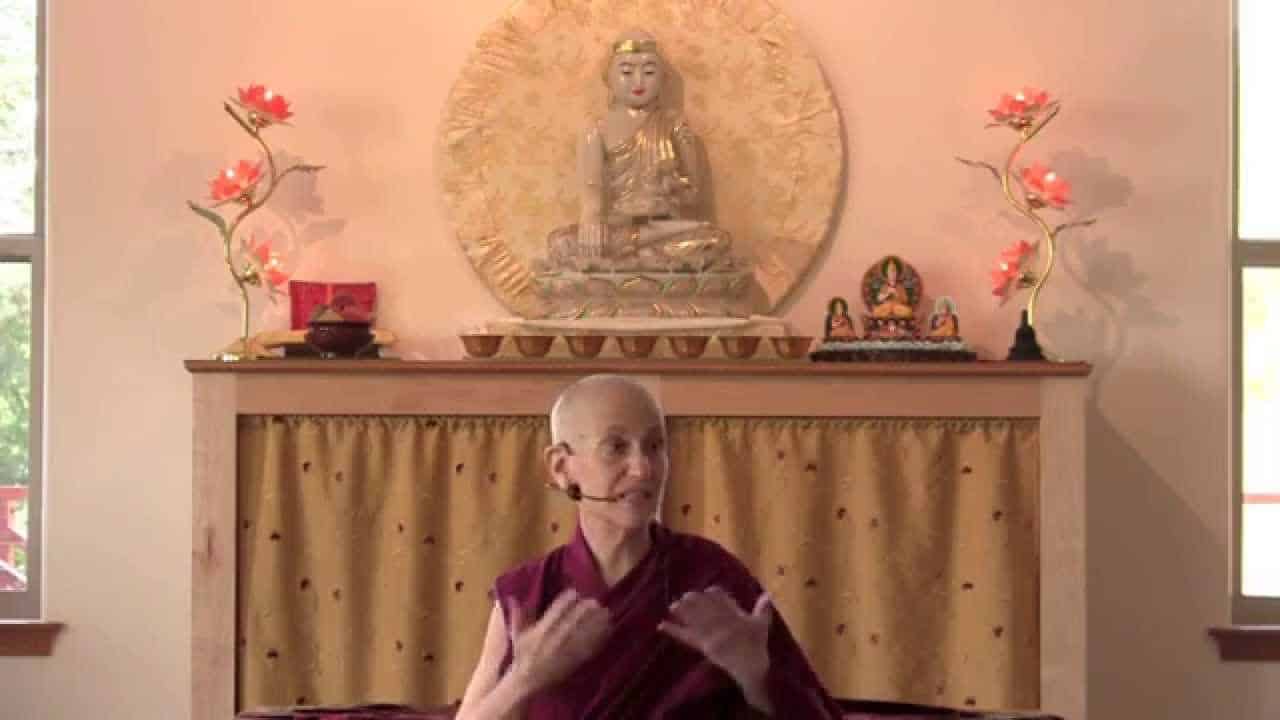