This box arrived this morning. And we restrained ourselves from opening it. It’s from Wisdom Publications and it has the new book Buddhism: One Teacher, Many Traditions.

This is the hard-cover book. And it’ll come out in paperback afterwards. It’s 350 pages, and actually it’s not (a very thick book).

The practice of vinaya develops mindfulness and introspective awareness. If we are about to do certain actions we train to immediately think, “I am a monastic and I have chosen not to do this.” By cultivating such mindfulness and checking if our behavior is proper when we are awake, our mindfulness becomes stronger and will also arise in our dreams.

The practice of vinaya also helps us to develop fortitude. The Pratimoksha Sutra says, “Fortitude is the first and foremost path. The Buddha declared it as the supreme way to attain nirvana. One who has left the home life, yet harms others or injures others is not called a renunciate.”

Maybe I’d better just tell people the table of contents first, and a little bit about the history.

The history of Buddhism: One Teacher, Many Traditions

The history of the book is, around 1993 or 1994, I had the idea of requesting His Holiness to write a short root text that the geshes can use when they teach in the West. And it took me a while to get an appointment, an interview, to see him, and I requested him to do that, and he turned right around and said, “Well, it would be very good if we put together a larger book first.” You know, about the lamrim. And they gave me some transcripts of his teachings that I started working on.

So I worked on that. And then some years later went to see him again and had a series of interviews throughout the years, and at one of them he said, “This book needs to be unique, it needs to have material about other Buddhist traditions in it.” Because he said that he, in recent years, had more contact with people of other religions than [with] Buddhists, and he said it was really important that all the Buddhist traditions know about each other and respect each other and work together. So he wanted this book to have material about the other Buddhist traditions in it.

Let me tell you about the kind of material in the book, because you can’t put material from every single Buddhist tradition in a book like this, you would never finish. So we followed kind of mainstream Tibetan tradition, predominantly according to Je Rinpoche’s teachings, but with some of the other Tibetan traditions in it. And then the Pali tradition, principally as in Sri Lanka, although with the other ones, but the mainstream Pali sutra approach, including vinaya. And then Chinese Buddhism, again, the general Chinese Buddhism, even though within China there are many different Buddhist traditions. So at certain places we may have quoted one or the other, but trying to present the general take on it.

What’s really sweet is Bhante Gunaratana wrote the foreword. He is the abbot of Bhavana Society in West Virginia. He’s 86 years old. Fantastic monk and scholar. I have a lot of respect for Bhante G. That’s what we call him. So, he wrote the foreword. There’s a prologue by His Holiness, and a preface that I wrote. And then most of the part about the Tibetan tradition was from His Holiness, and I edited that. And then I added the part about Chinese Buddhism and the Pali tradition.

Then the second chapter is about refuge. And this is a beautiful chapter, talking about—I won’t read all the things in the table of contents—but about the Tathagata’s qualities, what are the Three Jewels according to the Pali tradition, according to the Sanskrit tradition. And then a little bit of comparison about how the two traditions see the Buddha’s awakening; his parinirvana; is the Buddha omniscient or not? Okay? And then the 16 attributes of the four noble truths. His Holiness was very clear he wanted those in.

And then, the higher training in concentration. Again, about its importance. About different spheres of consciousness. The five hindrances according to the Pali tradition. The five faults and eight antidotes according to the Sanskrit tradition. The eight meditative liberations. About the super-knowledges. All the different kinds of special powers you can get from concentration. And so on. Those kinds of things. And then a discussion about blank-minded meditation and refuting the Tibetan idea that that’s what the Chinese do.

Then the higher training in wisdom. So here we have the 37 harmonies with awakening. So four establishments of mindfulness, the four supreme strivings, four bases of supernormal power, five faculties and five powers, seven awakening factors, eightfold noble path.

And then another chapter about selflessness and emptiness, taken from the Pali tradition and the Sanskrit tradition. And I found, this chapter was really interesting to write because you read some of Nagarjuna’s things and then you find parallels in the Pali canon.

Then a chapter on uniting serenity and insight, the union of shamatha and vipassana.

And then, progressing on the path. The different stages of realization as laid out in the Pali tradition and the Sanskrit tradition. Then about nirvana, in this chapter also, the different views of what nirvana is. That’s really interesting.

Then a big chapter about the four immeasurables, which are practiced in both the Pali tradition and the Sanskrit tradition.

Then a chapter on bodhicitta. So, the sevenfold cause-and-effect instruction and the equalizing and exchanging self with others. The four great vows in the Chinese, Japanese tradition. Aspiring and engaging bodhicitta. And also about bodhicitta and the bodhisattvas in the Pali tradition. Because some people mistakenly think the Pali tradition teaches only the hearer’s path, and it doesn’t. It also has the bodhisattva’s path.

Then the next chapter, Chapter 13, is the bodhisattva training in the perfections. And so there are ten paramis, or perfections, in the Pali tradition. Ten in the Sanskrit tradition. So talking about that, which some of the ten, there is some overlap. Some of them, the terms are not the same but the meaning of each one is found in the other traditions. Quite interesting.

And then a short chapter also on tantra.

And then a conclusion. And the conclusion is taken from a talk that His Holiness gave. There was a meeting in Delhi in December of 2012, sponsored by the Indian government. And it had representatives from different Buddhist traditions. So His Holiness gave the concluding talk there. So this chapter is extracted from that concluding talk that he gave.

So, that’s the book.

So Bhante G wrote the introduction. Bhikkhu Bodhi did an endorsement on the back. As did Alan Wallace, Jon Kabat-Zinn, Sharon Salzberg, and Tulku Thondup.

So, there we go. It finally happened.

When I was first writing Open Heart, Clear Mind, I was in Dharamsala. And you know, getting the proofs and everything, going through… And Peter Gold was there at the same time. He’s an anthropologist and a Buddhist. And he was writing a book. And he told me that writing a book and getting it published is like having a baby. So, he and I were both having babies. [laughter] And everything you go through. You know? This rewrite, and that rewrite, and then you send it off and it’s delayed. You know, it’s like your pregnancy is out here [arms extended], you’re ready to have the baby, but on and on. And then finally it comes out and you’re very happy. So. [laughter] This one had a long gestation. But, it finally happened. So that’s good.

So, now you have to read it.

It’s very concise, because I had to get so much material in not very many pages. So it’s concise. And you really have to focus when you read it. But it’s quite beautiful.

And then the longer book will have more explanation.

So, many thanks to Wisdom Publications, Tim McNeill, and also David Kittelstrom, who was my editor. And to Laura and all the other people at Wisdom. I can’t remember all their names. But they all contributed to make it a reality.

And also, incredible thanks to Samdhong Rinpoche for helping to facilitate it. And then also all of the different people from whom I learned about Chinese Buddhism and the Pali tradition. Because I had to go different places and study with different people and all, and so much help. And also, definitely, to the Buddha and the lineage. 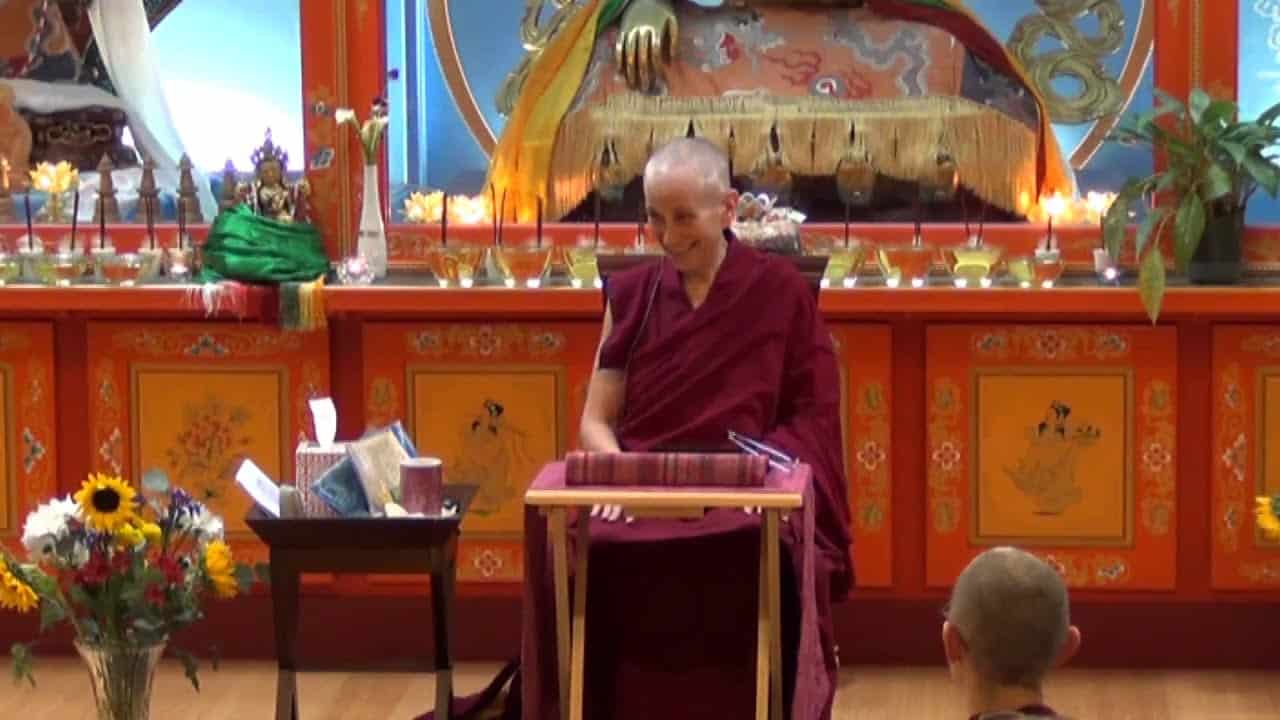 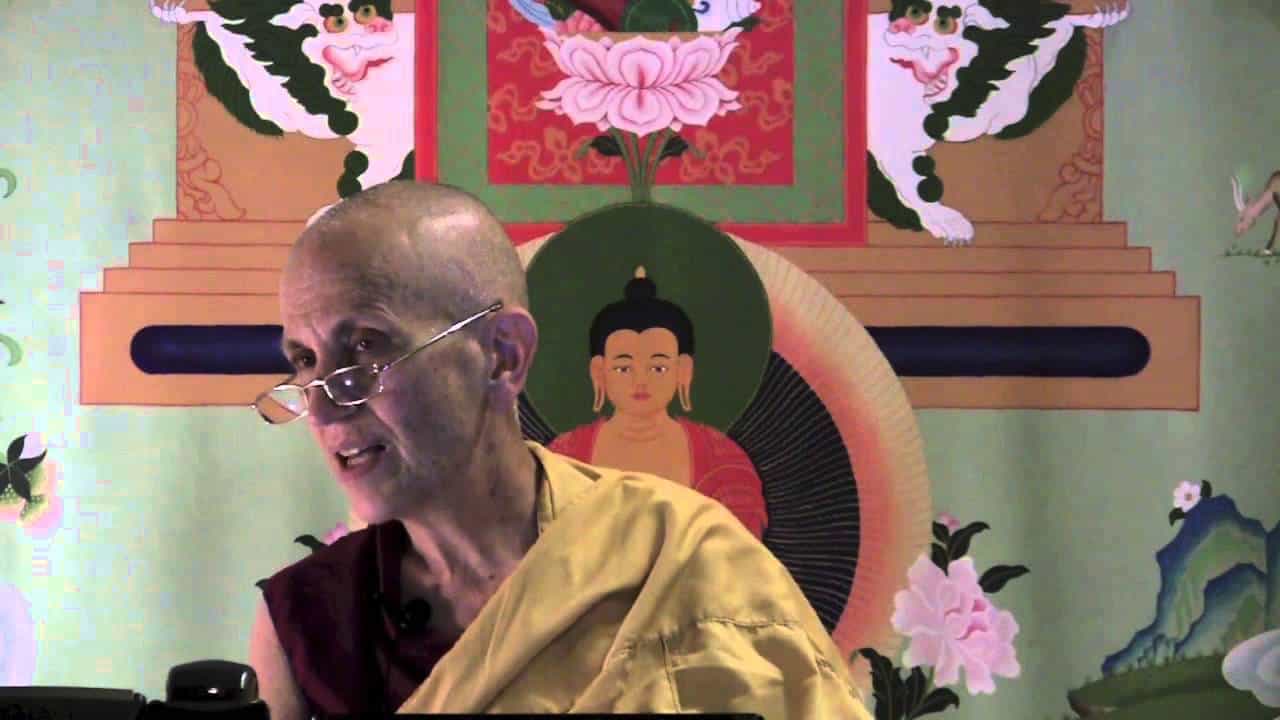