“May all beings repay the kindness of all buddhas and bodhisattvas.”
This is the prayer of the bodhisattva when seeing someone repaying another’s kindness.

It’s interesting, because the thing is exactly the same. The activity is exactly the same, isn’t it? Washing dishes is washing dishes. What our mind does to the action of washing dishes is, “Washing dishes of other sentient beings. Why do I have to do that? Why don’t they wash their own crummy dishes? They leave their dishes around here for me to wash. All these cups with crusts around them and junk I have to go wash these crummy things.” Then, something that comes from the meditation hall, a plate that we used for offering tsok or something that is very beautiful: “Oh, I want to wash that one! I will accumulate merit that way.” When we do something for our spiritual mentor: “Oh, that’s the highest of all the merit.”

What we have to do, I think, is make all of these actions equal. Not equal to the lowest common denominator of, “I don’t want to do anything for anybody, holy being or not,” but to realize that serving sentient beings is serving our teacher, and is serving the Three Jewels. If you think about it, why did the Buddha exert so much effort to become a bodhisattva (because the Buddha was once an ordinary being). Why did he exert so much energy to become a bodhisattva and then achieve buddhahood? Not only Shakyamuni Buddha, but all the other buddhas. Why do they go through three countless great eons? It wasn’t because they wanted to be superstars so someone would give them a few apples and oranges. It was because they cared about sentient beings.

Audience: In caring for others, there’s the action and there’s the intention. You said at a certain previous discussion that the action matters to a certain level regardless of the motivation. Then the question would be, when serving others, whether not thinking of yourself of the future or thinking of yourself in the future, there should be a difference. If there was a difference in that discussion, there should be a difference here too.

Venerable Thubten Chodron (VTC): Your question is: there is a difference in doing an action whether you have a certain motivation or you don’t have that motivation. Here, too, you’re saying if we do something for sentient beings because we care about the sentient beings and because we care about the Three Jewels is there a difference between doing it for that reason or just doing the action because it has to get done.

Audience: It seems like there should be but you are saying that the motivation doesn’t matter.

VTC: No. Actually what I am saying is that the motivation matters very much and that’s why when we do actions for sentient beings we should think: “I’m serving the Triple Gem. I’m serving my teacher. I’m serving sentient beings.” Then it all comes together. Then you raise what would be a neutral action like washing the dishes—or maybe even a negative action like “beep beep beep beep these stupid people, why don’t they clean up for themselves?”—by changing your attitude, making that same thing into an offering that creates so much merit because you’re offering to the Three Jewels.

Audience: If they’re just helping out they are not necessarily offering service to the buddhas and bodhisattvas.

VTC: Not necessarily. It also depends on where you’re helping out and what you’re doing. If you do something for a holy object, by the power of that holy object you create some extra merit.

We have these certain fields that are strong objects, like your parents, the poor and needy, and the Three Jewels: the Three Jewels because of their realizations, the poor and needy because of their need, our parents because of their kindness. Helping any of those three fields creates more virtue than just doing it for ourselves or doing it for other people. Even if you don’t have the intention of “I’m serving sentient beings, or “I’m serving the Three Jewels” when you’re helping your parents, even if you don’t have that, you’re still creating more merit because of your parents being a powerful object. Similarly, people who come here and offer service to the Abbey, I think because we’re a dharma organization that exists because we want to benefit sentient beings and spread the Dharma, it creates more merit than gardening in other places, for example. If you want to increase the merit even more—because remember we’re talking about different things that make an action weak or strong—one is the motivation that you touched on, one is the power of the object. If you have both of those together (that’s the best). Does that answer your question?

Audience: My conclusion is that there are levels. There is a level for doing a virtuous action like just helping Joe blow with a motivation and a level for just doing an action.

Audience: But which of them is serving the buddhas and bodhisattvas? Or is that just a metaphor?

VTC: I think in one way, from one point of view, they’re all serving the buddhas and bodhisattvas because we are serving sentient beings. But for us to accumulate that karma, kind of a “super karma,” then I think it’s better we have that intention that we’re also serving the Three Jewels.

Audience: I’m wondering, what they call “pure view,” trying to see everything as a pure land and with the assembly of bodhisattvas. To me when I was first introduced to that in my other search for a utopia, a kind of illusory thing … it seems like if your motivation was more like what you were saying today, raise everybody up, that would be like the motivation for doing that, to make your mind more vast and to raise everybody up.

VTC: You’re asking about pure view and seeing the environment as a pure land and sentient beings as buddhas. Yes, in one way that raises all the sentient beings up to the level of being the Buddha. Then it becomes easier to do things for them and behave nicely and everything else. The pure view, it’s also an antidote that helps us not get angry and upset. If somebody you knew was a buddha kind of left the mess on the floor you probably wouldn’t get as upset.

Audience: What is the proper motivation to want to adopt that as a practice?

VTC: Adopt a pure view? You do that as a part of tantric practice, and I think you do it in order to create merit, in order to prevent afflictions from arising too and in order to familiarize yourself with the view of emptiness.

VTC: I think this is fitting in with her question.

Audience: I was thinking of it actually in reference to “poor and needy.” I mean if you’re at a Dharma center and people don’t want to go wash the dishes, if I set my mind “these people are poor and needy, like they don’t have money, they are going to suffer because they don’t want to do this, they have negative mind states,” I’d be helping them in that way. Is that changing them into an object of more virtuous…?

Audience: Turning our mind to that aspect of it, does that kind of set that portion of it to them being an object of making good virtuous karma?

VTC: I don’t know if you change them into the object. You’re changing your mind, making your mind into a virtuous mind. Let me give you an example. I spent a deal with time once when I lived in a monastery going into the kitchen and people would leave their filthy cup sitting in the sink and then their dirty dishes are sitting in the sink. They just drink and use something and put it there and expect somebody else to clean it up. I would get really ticked off. I like living in a clean place and I want to be able to go in and do my thing and not spend a half an hour cleaning up after somebody. I would get angry. Of course, if you hear enough teachings you realize when you’re angry that that’s not a virtuous state of mind and you’re creating negative karma. At some point that dawns on you. I always knew that I didn’t have a right idea, but I had a hard time changing it. Then some years later I was staying with somebody who did that exact same thing and I just said to myself, “Now I am going to clean up after her and this is my purification for having so much anger when I cleaned up after other people.” I just had that intention in my mind, “I created negative karma even though I was cleaning up after them, years ago, doing that with anger that I need to purify that. Now this is my chance to do it. I am offering service to the sangha.” I do it like that. 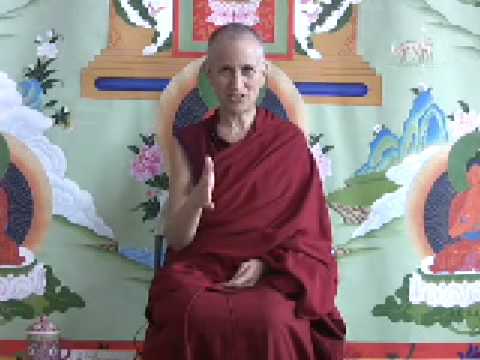 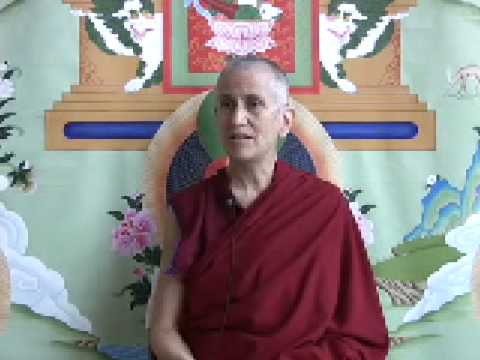 Verse 33-2: The kindness of others