You are here: Home > Online Course – Buddhism: One Teacher, Many Traditions Part II
By Heather Mack Duchscher on Jun 28, 2017 in 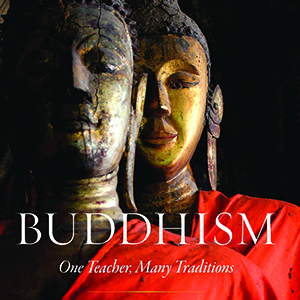 In this course with Ven. Thubten Chodron, you’ll explore the world of Buddhism through her book with His Holiness the Dalai Lama, Buddhism: One Teacher, Many Traditions and discuss with your fellow students the core teachings shared among Buddhist traditions. In addition to building your knowledge of Buddhist doctrine, you’ll gain insight into how they are understood by Buddhists around the world. You do not need to have taken Part I of this course to take Part II, but if you’d like, sign up to take Part I first, Buddhism: One Teacher, Many Traditions Part I

“About this Course” in-depth course description

Buddhism is practiced by hundreds of millions of people worldwide, from Tibetan caves to Tokyo temples to redwood retreats. All these traditions trace their beginnings to the teachings of one man in India 2,500 years ago. These teachings spread throughout the world and into numerous languages, making Buddhism one of today’s most influential religions.

In this course, you’ll join Venerable Thubten Chodron for an in-depth discussion of the core teachings of Buddhism shared across traditions, such as mindfulness, emptiness, and dependent arising. Ven. Chodron’s illuminating commentary on how each of these, and more, are approached within the many traditions of Buddhism forms the basis for your own exploration of Buddhism’s shared heritage and diverse expression. There is no prerequisite to have taken the previous course; you can join in with the material covered in Part II.

This ten-lesson course is the second in a series based on the book Buddhism: One Teacher, Many Traditions, co-written by His Holiness the Dalai Lama and Ven. Chodron. This book is an expression of His Holiness’s strong belief in the merit of different Buddhist traditions being more educated about one another.

The course is created, produced, and conducted by Wisdom Publications. There is a tuition fee.