Most of the karma that ripens in this lifetime comes from actions we have committed in previous lifetimes. This can make it hard to believe in the reality of karma because we aren’t seeing a direct cause and effect. We can only infer what we have done previously that is resulting in our present suffering or good fortune. Sometimes, however, we are lucky enough to witness the immediate ripening of our negative or positive actions.

Case in point. My dear wife, Juliet, has a problem with keeping track of her car keys. Her loving but obnoxious husband (me) has not always been very understanding. I am a detail oriented person with a touch of OCD. So I almost never lose anything. My advice to Juliet often took the form of saying “Well if you would only leave your keys in the same place you could always find them.” This was usually said with an air of pride and arrogance on my part. Obviously this unkind remark only made her feel worse. 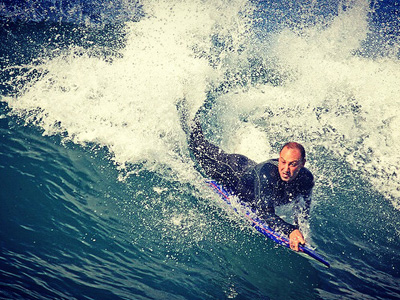 I knew exactly where it was. It was in the Pacific Ocean! (Photo by Bengt E Nyman)

Several years ago I was working part time in Hawaii. One day we planned to go boogie boarding at the beach. I was quite excited since the waves were supposed to be perfect. When I got out of our rental car I put the electronic key in the pocket of my swim trunks. When we got down to the beach I saw the waves and immediately became brain dead. I couldn’t get in the water fast enough totally forgetting the key was in my pocket. It was a whole hour later before I came to my senses. Technically speaking I didn’t lose the key. I knew exactly where it was. It was in the Pacific Ocean!

My dear wife didn’t say a word, although I knew that inside she was jumping up and down with glee. Five hundred dollars later the rental car agency brought me a replacement key. OUCH! No doubt about it I was having a karma beatdown. It made me a believer. If I didn’t want suffering then I needed to avoid those negative actions that cause suffering. This isn’t rocket science.

Juliet is still misplacing her keys. But now I don’t say a word. I just smile and tell her how much I love her.

Find more on these topics: karma

Self centeredness and the five decisions