On Saturday, June 29, 2013, a number of Abbey monastics and one of our guests had the wonderful opportunity to join the inmates at Airway Heights Corrections Center for their 18th Annual Buddhist Celebration day. All the planning and preparation for the event was done by members of the inmate Buddhist group, who are deeply committed to making this event a celebration of their practice and to sharing their joy and gratitude with their invited guests. It is such a great privilege to experience the warmth and sincerity of these people who are so engaged in developing and deepening their spiritual practice and bringing peace and understanding to their current situation.

Each year the Buddhist group selects a theme for the day, and this year it was the Dharma and how it has influenced our life. Quite unexpectedly, we guests were invited to give impromptu reflections on the topic, which we all enjoyed doing. Then, to everyone’s great delight, the members of the Buddhist group also responded to the topic in any way they felt moved to do. What followed was so deeply touching that many of us were wiping tears from our eyes.

The first person to share explained that he had suffered a stroke in February. This not only deeply shook him up, but it also pointed out how living the next moment is not a guarantee. He began to weep as he described the way that his Dharma brothers cared for him, and he expressed his gratitude for their support and love.

The next person to share spoke about the joy and happiness in his heart to have all of his Dharma brothers gathered on this day and for the support of their teachers and guests. He kept bringing his hand to his chest and repeating his feelings of joy and happiness. 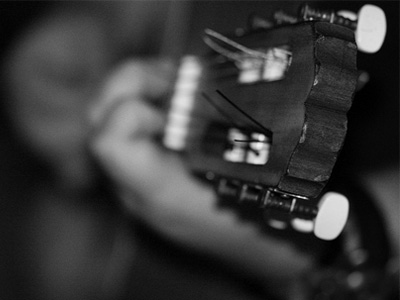 The song captured in a worldly way the description of what a pure land could be like. (Photo by Denise Rowlands)

The next inmate to share is well-known for his drawing and painting abilities. Today he stepped out in another direction and, with guitar in hand, sang a folk song for those not so familiar with the Dharma. For him, he explained, the song captures in a worldly way the description of what a pure land could be like.

A newer member of the Buddhist group performed a classical ballet dance to a beautiful recording of Om Mani Padme Hum. The assembly responded with enthusiastic clapping, and the word “beautiful” was heard repeatedly for the next several moments.

The inmate who was the Master of Ceremonies concluded the sharing by bravely pointing out his observation that many people who end up in prison adopt a victim mentality. They spend all their time, he said, thinking about what they should be entitled to and how they have been done wrong. They think about what others could have done or should do differently and never take responsibility for their part in what they are experiencing. This inmate has come to see that he spent a great deal of time creating the causes and conditions that have resulted in now being in prison. He is so grateful for the Dharma. Now, since being in prison, he clearly has come to understand that he is capable of creating positive causes and conditions for the future by engaging in virtue now.

The depth of sharing and the frequent expressions of the inmates’ gratitude for the Dharma—for those who come to support them in their spiritual practice and for the support they give and receive—was most beautiful to witness. We returned to the Abbey with hearts and minds warmed by seeing the results of practice in those who are motivated to transform their minds in the most challenging of environments.

Venerable Samten met Venerable Chodron in 1996 when the future Venerable Chonyi took the future Ven. Samten to a Dharma talk at Dharma Friendship Foundation. The talk on the kindness of others and the way it was presented is deeply etched in her mind. Four Cloud Mountain retreats with Ven. Chodron, eight months in India and Nepal studying the Dharma, one month of offering service at Sravasti Abbey, and a two month retreat at Sravasti Abbey in 1998, fueled the fire to ordain. This took place August 26, 2010 (see photos). This was followed by full ordination in Taiwan in March, 2012 (see photos), becoming Sravasti Abbey's sixth bhikshuni. Right after finishing a Bachelor of Music degree, Ven. Samten moved to Edmonton to pursue training as a corporeal mime artist. Five years later, a return to university to obtain Bachelor of Education degree opened the door to teaching for the Edmonton Public School board as a music teacher. Concurrently, Ven. Samten became a founding member and performer with Kita No Taiko, Alberta's first Japanese drum group. Ven. Samten is responsible for thanking donors who make offerings online; assisting Venerable Tarpa with developing and facilitating the SAFE online learning courses; assisting with the forest thinning project; tracking down knapweed; maintaining the Abbey database and answering email questions; and photographing the amazing moments that are constantly happening at the Abbey.
View all posts by Venerable Thubten Samten →