An article published in Kompas, the main newspaper in Jakarta, Indonesia.

How is consumerism related to praise and approval, reputation and enjoyment of sensual pleasures? Is it part of the human condition that we no longer know the word “enough” when it comes to consumption? 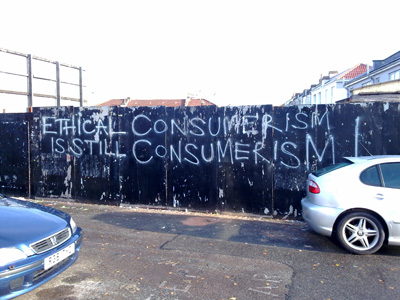 These questions were the subject of conversation with Venerable Thubten Chodron (61) on a gloomy morning. The Jakarta sky was filled with thick clouds decorated by flashes of lightning and roaring thunder. The sound of car horns could be heard clearly from the 16th floor of the service apartment in West Jakarta.

“Consumerism is always associated with these four things, namely, material wealth, praise and approval, reputation and sensual pleasures such as seeing beautiful things, hearing pleasing sounds, and so forth,” said Venerable Chodron gently.

Consumerism has become an area of concern to Bhikshuni Thubten Chodron, the founder of Sravasti Abbey, a Buddhist monastery near Newport, Washington State, USA, because, “The modern world is tethered to making money. Almost everyone worships money and materialism.”

In fact, many people pray for fortune, and ask to receive the best material possessions. Yet, the real purpose of all religions is to teach kindness and compassion, ethical values, forgiveness, and other positive states of mind.

“I think all religions are now facing the same challenges that relate to the cult of consumption and materialism,” she said. “This obsession with material goods and pleasure diverts people from cultivating good ethical values.

According to Venerable Chodron, in life, the five human senses are constantly drawn to objects outside of the self. Our senses are affected by and react very strongly to external objects. Therefore, most people, regardless of their religion, nationality or culture, all look for beautiful things, thinking that they will bring happiness in life.

“Attachment motivates our reactions,” she said. “When our wealth is lost, when we are criticized, when our reputation disintegrates, and when our feelings are disturbed, we become upset and angry. This often leads to tension, war and violence; it is a universal problem today.”

Ironically, in modern society, we believe that consumption will make us happy. Also, from an economic perspective, domestic consumption will improve the economy. Though natural resources are limited and non-renewable, we have not done much in terms of taking care of the earth by reducing our consumption, reusing things, and recycling.

“In America today, there is a lot of discussion about the possibility of building an oil pipeline from Canada to Texas where the oil will be processed. This will be very damaging to the environment, but it seems this has not been considered. People think only of current benefits, and ignore the effect of their actions on future generations.”

Human greed has led to the destruction of the environment and animal life. Yet, greed continues to be the dominant mental state everywhere, and has even led to military invasions, conflict and war.

“For longterm happiness, we must not compromise our ethical principles in favor of unchecked consumption,” she said. “All religions speak of goodness, of compassion and love. Protecting the environment means to maintain life, and allows us to learn the true meaning of compassion in the practice of everyday life.”

Dialogue with the self

Consumerism is also associated with our desire for shortcuts.

“Greed confuses and corrupts us,” said Bhikshuni Chodron. “We must return to ethical principles and realize that greed will not help people find meaning in life and will not make people happy.”

Increasingly, people do not feel regret when they engage in unethical behavior, because “their minds are too busy with concerns about their public image and with consumerism. They don’t have time to become friends with themselves, to ask, ‘Do I really like myself?’”

One of the most important things in life, according to Venerable Chodron, is to feel good about yourself, to be always in touch with yourself, and live in peace with yourself throughout your life.

She emphasized that corruption means to corrupt yourself.

“At the end of the day, we must make peace with ourselves. When we die, material wealth, property, credit cards, reputation, physical pleasure, are all left behind. At that time, many people regret the harm they inflicted on others due to their attachment and anger. I’ve never heard of anyone who, on their deathbed, regrets not buying a new diamond. “

Venerable Thubten Chodron was born into a Jewish family and grew up in a Christian neighborhood near Los Angeles, California, USA.

At the age of 24, she listened to talks on Buddhism for the first time and was very interested to learn more. “My teacher said, ‘You do not have to believe anything I say. You can question anything.’ I thought, ‘This is really fantastic!’”

She then began to think, question, and listen to her conscience. “I saw a lot of truth in the Buddha’s teachings, and from a logical perspective, they made sense. So I began studying and practicing, and experienced a lot of benefits. I realized that I wanted this to be my way of life. After searching for the meaning of life for such a long time. I decided to make a commitment.”

Her decision was not in line with her parents’ wishes, who expected the eldest of three children to have a good life according to worldly conventions: to have a good career, material wealth, reputation, praise, and more. “But then they saw how happy I was, and realized that others appreciated and benefited from what I was doing, and they relented.”

Venerable Chodron studied directly with well-known teachers of Tibetan Buddhism, including His Holiness the Dalai Lama. She studied at a monastery in Nepal, and in 1977 she became a sramanerika (novice) and eventually a full bhikshuni in 1986. She became director of the spiritual program at Lama Tzong Khapa Institute in Italy, and taught at Amitabha Buddhist Center in Singapore and Dharma Friendship Foundation in Seattle.

Venerable Chodron builds dialogue with the Jewish community and between Buddhist and Catholic nuns. She has also written several books, including Open Heart, Clear Mind; Taming the Monkey Mind; and Working with Anger.

Venerable, what is the meaning of your name? “’Thubten’ means ‘the Buddha’s teachings,’ and ‘Chodron’ means ‘light of the Dharma.'” The Dharma is the path to awakening.