Ulric wrote this essay when he was a senior at Reed College in Portland, in the final year of the Iraq war that lasted from March 2003 to December 2011. The toll that war takes on individuals, drastically affecting the rest of their lives in ways they did not anticipate, is often ignored in favor of political, military, and economic reports of war. 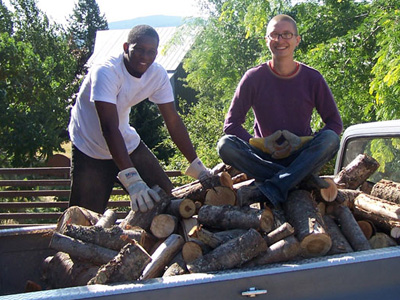 In the last few days, the Reed chapter of Students for a Democratic Society (SDS) were putting up flags on the front lawn representing the dead as a result of the Iraq War. There are several hundred thousand white flags for Iraqis (1 flag represents 6 dead), and 3,000 red flags for the American soldiers (this time a 1:1 ratio). The growth of this project has been emotionally overwhelming. I’ve spent several hours undergoing this activity since Sunday (in several blocks).

Today was an especially moving day. As I was headed to the library, I overheard a homeless Vietnam veteran (who was carrying cans) speak about the horrors and nightmares of the Vietnam time. He talked about being trained to kill, and being sent in to kill people who had no reason to be killed. He said he still had nightmares. Then he recounted how he was headed to his son’s funeral who himself just died in the Iraq War. I suggested to him that he put some flags down for the healing process.

He grabbed a bundle of white flags, and he somberly began to place them. He then asked what the colors meant and he asked if there were any red ones left. Since I needed to head out to the library, I asked one of the SDS kids to go out to find a red flag for him, a hard feat given that we were running out and we weren’t even sure if there were any left (there are still countless white flags to be put up). I forgot something and left the scene, and when I came back, the kid was handing the man a red flag. He saluted the kid, military style, and took the flag and placed in the ground, and saluted it. At which point, I was in tears, and again am in tears writing this. He then continued placing white flags, and bitterly said, "Thank you, Mr. Bush."

This story was written for a non-Buddhist community. I would like to add that as I placed flags, I chanted om mani padme hum quietly and visualized for each flag that I placed white light headed to the various Iraqis and Americans who have died. I visualized Chenrezig sending white light and aiding these people to have better rebirths, even if they died in anger as a result of the war.

I request that you strengthen your outreach practice with a dedication to this man, his son, and the rest who have died.

Venerable Thubten Chodron shares her thoughts on the Iraq war. She also recommends reading “War and Redemption: Treatment and Recovery in Combat-related Posttraumatic Stress Disorder” by Larry Dewey (Ashgate, 2004), a psychiatrist who treated war veterans at the VA, who shares the long-term human effects of war on soldiers. With the number of vets returning from Iraq, this book helps society in general and families in particular learn about the events, stories, and feelings that vets so often have difficulty verbalizing.