Last night I was awakened to my bunk mate standing over me—making his top bunk—in his underwear. Now it is my opinion that this guy has a few mental issues so understand that I should have said things differently. At any rate, I asked him, “Man, don’t stand over me like that in your underwear.” 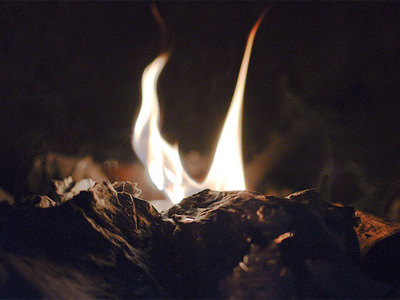 We choose between feeding the fire or letting it die down. (Photo by Casper Maas)

Well, that did it. He went completely out of it, calling me every name he could think of. Then he called me out to fight. Of course I told him I wasn’t going to fight him, but he kept trying to bait me. Eventually he realized I wasn’t going to bite and stomped away.

Throughout the day, though, he kept coming back to our cubicle saying more bizarre things. I just let him rant and rave. What was interesting is that during all of this I somehow remained calm, and what he said had little effect on me, other than a deep sense of sadness and remorse that I had caused him so much anger. All during the day other guys came up to me, saying, “Man, you know he’s mental” and “Hang in there,” etc.

What I discovered is that by my not feeding the fire, it just ran out of fuel and dissipated.