My first awareness this morning came with the sumptuous perfume of exotic coffee permenating my nasal membrane in the manner of a soothing balm. This luxurious scent was fortified with the aroma of baked delicacies—ambrosial strudel or Danish, perhaps. I had become the gourmand who was leisurely awaiting the arrival of Epicurus himself with silver tray in hand.

When I turned on the overhead flourescent light, it did not emit its usual cold and ghoulish sap, but rather, it benevolently provided golden waves of living energy, which caressed my innermost being. In the mirror, my appearance had changed from the likeness of a cancer patient to something resembling Ryan Seacrest after his health spa regimen. A nimbus was beginning to take form when it occurred to me that Garry Kasparov could have retained his title in June, 2005 if, in his final game against Veselin Topalov, he had played 21 to Qd8 rather than trading queens. After that, my reverie on string theory was overcome by an Arion chorus (It’s a Perfect Day). 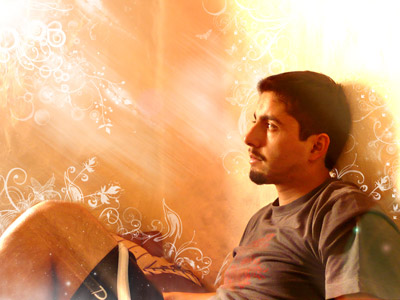 I feel encouraged and assured somehow as I struggle to recall the dream, which I have just left behind. (Photo by яғ ★ design)

Looking out the window, which was now palatial, I noticed a brillant rainbow forming a bridge over the concertina. A gathering on the other side of the fence was being organized by Barack Obama and Rush Limbaugh. My curiosity was piqued, if not frenzied, and so I moved towards the gathering, nobody challenged or hindered my progress. Every door and gate opened by itself as I approached and I felt like Captain Kirk onboard his starship; like Maxwell Smart waking down the corridor at the beginning of his show. This was carte blanche and, admittedly, I had a momentary urge to stop by administration and brief the warden on some of my management ideas. Yet, as I crossed over the spectral bridge, all of my preoccupations with the past simply dissolved. I was moving across some manner of existential fulcrum.

I approached President Obama and, even though we are in the midst of March Madness, I decided to skip the small talk. “Mr. President, why are you here? Don’t you have more important matters?” I asked. “I’m here to greet you,“ he said, “and to welcome you into the service of our great land.” My jaw dropped forcefully, pulling a muscle in such a way that would give me trouble chewing ambrosial strudel later in the morning. How did he even know that I remain more patriotic than the typical imprisoned felon? I started to compliment him on his stem-cell funding decision when I heard the voice of an angel call out my name. When I turned to look, I saw an incredibly attractive woman standing next to a limousine and holding a placard with my name on it. My eyes did not register any recognition but my heart melted with reverence and began to float. The president made a gesture and so I excused myself.

My driver, Tara, answered all of my questions with very brief answers and assured me that I was doing the right thing. “Exactly what am I doing?,” I asked. “Riding in my vehicle,” she said as she raised the barrier between her compartment and mine. The limo started to move and one of my favorite songs began to play — “Time Out From the World” by Alison Goldfrapp. I closed my eyes and drifted into the aether. I felt as if the very atoms of my body were disbanding, leaving nothing but that which is clear and knowing.

Nirvana was undoubtedly at hand when I became aware of a familiar sound moving toward me and slowly growing into a red pulse. I was immediately conveyed back over the spectral bridge, which now seemed dull and muddy in color, every door and gate was slammed directly in my face by a uniformed guard with the face of a troll and the mouth of a sailor. “Where the fuck do you think you’re goin’ with your Opie Taylor lookin’ ass?” said the ogress. The anger that tends to arise in me so easily is starting to give way to heartache. Such an ugly world. The hand in my right pocket begins to shuffle the beads, which are concealed there as I search for the perfect response, which never seems to arrive, and yet which I never cease to believe is forthcoming. My mind seems clouded. “Good morning,” I say. When the guard opens her mouth to speak, I recognize her voice as the sound of my alarm clock.

Within a few moments, an awakened state is fully restored to my aging body with all of its discomfort. I turn on the gray, strobeing, florescent light and spoon some freeze-dried pebbles into a cup of lukewarm water. My eyes scan the cell where I have placed an image of Buddha at the head of my rack. I begin the day with an attitude of refuge in the Three Jewels and place a mala into my right pocket. I feel encouraged and assured somehow as I struggle to recall the dream, which I have just left behind. Oddly, Rush Limbaugh comes to mind.

Find more on these topics: Tara