You are here: Home > Practical Buddhism > Prison Dharma > By Incarcerated People > On Attachment > Loneliness
By M. P. on Nov 25, 2008 in On Attachment

Asked by Venerable Thubten Chodron to research his loneliness—its history, from where it originated, and how it influenced his life—M. P. concluded:

Using drugs, playing music, and being a good artist were things that attracted people. I was a fisherman and these were the baits I used to land a steady supply of bodies. In retrospect, probably the reason many relationships failed was because I wasn’t really committed to the person, only to the pursuit of company, the pursuit of a relationship to protect me from loneliness. 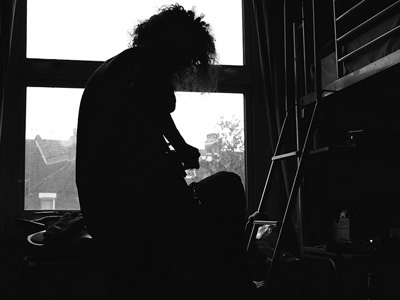 As I look back on it now, I see clinging to other people, to relationships, to membership in a group, to popularity as an attempt to affirm a substantially existent self or me. It is seeking refuge in ordinary things, trying to escape suffering through having impermanent phenomena instead of seeking it in some real, long-lasting source.

Ignorance is the root cause, because if I’d realized that momentary phenomenal arisings cannot provide permanent cessation of suffering, I wouldn’t have continued to look outward. If I hadn’t been full of ignorance, I would have searched my own mind for the source of the loneliness and also for the solution. Instead, I saw the solutions to unhappiness as being outside of myself. I didn’t realize that this is all projection of a delusional mind, filmed through imperfect sense organs. I was looking across the yard for the source of the burning pain in my head. Not very logical.

It’s kind of funny that I would end up going to prison, where people are stacked on top of each other, where there is no privacy or solitude, no “alone time” at all. But of course, I don’t feel alone or loneliness any more since I started practicing the Dharma. I’m never alone now, there is no sense of loneliness. I don’t want to attach myself to a group or a person in order to avoid being alone.

Also, I’m always joined by an ocean of animals, human beings, and others, jointly experiencing suffering due to our habitual disturbing attitudes. We are never alone. We have responsibility to each and every one of these living beings, to quit harming them through our ignorant, self-centered actions and words. We have a responsibility to work towards wisdom awareness that will allow us to benefit others through miraculous, compassion means, each specific to the individual’s suffering.