Venerable Thubten Chodron: I’d written J. H. about a story I read of a Thai monk who went to meditate in the jungle. One day he saw a tiger and was petrified. He left quickly, but later he was repeatedly tormented by fear of encountering a tiger again. Finally he thought, “It’s better to be eaten by a tiger that to live with fear. If I created the karma, a tiger will attack me even if I run away, but if I haven’t created the karma, a tiger won’t.” The next time he saw a tiger he didn’t leave the area, but started moving towards the tiger. The tiger walked away. Each time he saw a tiger, he moved towards it, and each time the tiger walked away. Slowly he overcame his fear of tigers. It seems that the principal cause, the karma to be attacked by a tiger, hadn’t been created, or if it had, it wasn’t yet ready to ripen. However, later when that monk was elderly, he disappeared while living in the jungle. His body could not be found. I wonder if that time both the principal cause—the karma—and the cooperative conditions had been present for him to be harmed by a wild animal and that’s how he died. Or he could have died in another way. No one knows. But even if he died due to being attacked by a tiger, for sure he died peacefully, without fear or hatred for the tiger.

Some months ago, an inmate tried to extort money from J. H. and threatened violence if he didn’t pay. J. H. requested the prison authorities to be put in protective custody where he was confined to a cell 23 hours a day. He recently returned to general population and was feeling afraid because even though the other inmate is no longer in that prison, his friends are. J. H. wrote:

J. H.: Speaking of fear, I am back in general population, have been for about a month. How is it? It’s just what I expected it to be! It’s no different than the place I was living. I have come to the awareness that it is my mind, not the environment, that makes the difference. I make the environment either good or bad. When I expected the population to be scary, it was. Now that I have settled down a bit, it’s full of people just trying to get by (because that’s the way I choose to see the people). In other words, the population goes good some days and bad others. It all depends on how I wake up in the morning and how mindful I am of my mental state. 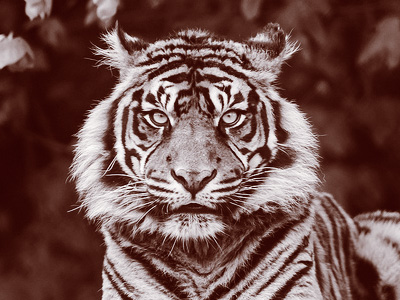 Either the tiger will attack me or it won’t. It’s all a matter of the karma I have already created. (Photo by Tambako the Jaguar)

I do have a conflict looming. There is a guy who was friends with the last guy I had a conflict with (the one I requested protective custody from). This guy has insisted that I owe him $20. I don’t, but that’s not really relevant. The point is that the guy wants me to pay him money, just like the last guy. This is my own tiger story. I’ve finally accepted that I have some karma to work out in this regard. Either the tiger will attack me or it won’t. It’s all a matter of the karma I have already created. There’s little I can do to change that overnight, especially since I’m too lazy to meditate that much. Still this is not really a condition arising from being in population. I know the “extortionist” that I constantly face doesn’t come from my environment and has nothing to do with where I live. I created him—that is, the appearance of him in my life—through my own actions.

I have to say that I have the same fear that I had before. I haven’t been physically attacked since I took the bodhisattva vows. When I was a child and into my teens, even during the time I was in juvenile detention for the case that landed me in prison, I always got angry when I was struck. It is simply a reflex, instant rage. I don’t have the anger I used to have, but I worry that one day some guy is going to hit me, and before I think about it, I am going to respond in anger. That scares me to death. Not that I will get hurt, not that something bad might happen to me. I am scared that I haven’t worked on the perfection of patience enough that when the time comes, I will break my bodhisattva vow by getting angry and striking back. I am really afraid of that.

It’s not that I am inclined to retaliation anymore. Far from it. It’s just that I worry about those times when I won’t have a chance to contemplate and will simply react. I guess this too is part of the path, no?

Yesterday I received a letter from the courts telling me that my appeal has been denied. Today I received a letter from Lama Zopa Rinpoche about monk’s vows. Do you know which one I am more concerned with? The monk’s vows. The idea of spending the rest of this life in prison is not so scary. The idea of never becoming a monk in this life is frightening.

You asked how my new tiger (the new guy who trying to extort money from me) is. Same as the old tiger, same as the old one. This reminds me of the story of Venerable Drugpa Kuenleg, who was doing a ritual to dispel spirits for his brother. When it came time to throw the ritual cakes to the spirits, instead of throwing them outside, he threw them in his brother’s lap. It was a way of saying “The demon lives in the heart. His name is self-centeredness.” My tiger is an outward expression of an inner condition. I know this. So I guess in some ways, my situation with the tiger is better in that I know where he comes from now.