M. T. is serving a long sentence and was recently denied parole despite the major changes he’s made in his life and way of thinking. What follows is an excerpt from a letter he wrote to Venerable Chodron.

You wrote that I should make prayers in my practice that in future lives I may be of benefit to all those people I harmed. While I do that now, I also pray that they are doing well right now, that the victims I raped have gone on and become whole and happy, that the man whose life I took had a fortunate rebirth, and that his family has prospered since his absence. 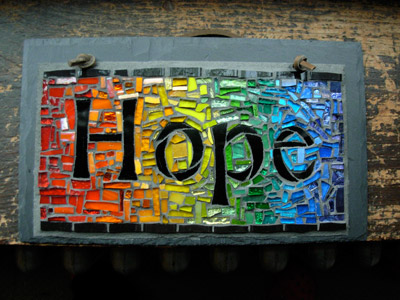 But I always feel hope. Why? (Photo by Margaret Almon)

I look behind me, at my past, and see the unwholesome aspects of my life. I am deeply ashamed and remorseful for the sadness or pain I caused anyone. I even think of the animals I mistreated, an unkind word or action I may have done to a stranger. I look at it all and at times dwell on the memory of those events. At times I react viscerally; I get sad and teary-eyed. And there is always the question, “Why was I such an ass?”

But I always feel hope. Why? Because I also remember when I acted with kindness, when I thought of others before myself, when I nursed and released an injured animal, when I said a kind word or performed a wholesome action for a stranger. While some of these activities may have been ego-driven at the time, they were good nevertheless; they were a start. I’m no saint by any means, but I’m doing my thing and getting by quite well. I do whatever I can that is wholesome and bring to mind an awareness when something is unwholesome. I’m working on it. And so I will continue my prayers for those I’ve harmed and will do whatever I can in this lifetime to do what is wholesome. That is what this practice is all about, yes?

Venerable Chodron, I want to thank you for your candid and sincere narration of how difficult it was for you when you began Dharma practice. You mentioned in part,

What stood out for me as the difficulties we went through weren’t the physical ones—living in poor conditions in India or being very poor in the West. Rather it was the fact that my mind was so full of rubbish then. I was confused and unable to detect when my mind was overcome with mental afflictions. That was what actually caused all the difficulties, not the living conditions or how Western society treated Buddhist monastics.

In my past I’ve always found it convenient to blame something other than myself when things went wrong. It was either someone else’s fault or some condition that caused me to fail at something. You’ve pretty much confirmed many of the experiences I have been going through ever since I’ve been on the Dharma path. The struggles you’ve experienced (and probably still do?) are a mirror to what I have been through and continue to this day. I am grateful that I am not on this journey alone.

The meaning of refuge