He made her cry again. I remember laying awake staring at the ceiling. I was probably 14 or 15 years old. They’re arguing … they try to be quiet so we won’t hear, but that’s no good. My heart is as black as the darkness in my bedroom. I hate him! I wish that he was dead … over and over again. Someday I will be grown up, and he will be sorry. I swear that someday my mom will never cry again.

I remember being much smaller, hiding under the kitchen table. They were both yelling. He was throwing stuff. It was the first time I ever saw him angry. Not the last.

I remember my stepbrother and I fighting. He beat my stepbrother with a belt for making me cry. He beat me for crying. I remember him with a pair of scissors and a razor, pretending to cut chunks of our hair until one of us decided to tell him why we were fighting. 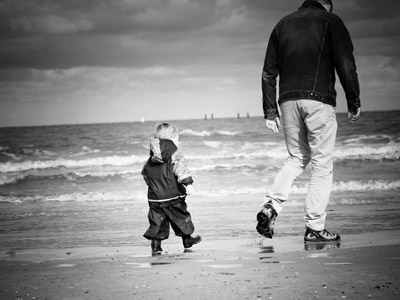 I remember us going to the beach with the metal detector and digging for buried treasure in the sand. (Photo by Rianne van de Kerkhof)

I remember wishing that I had someone to teach me to play ball. I remember going to Cub Scouts on “Father and Son Day” with Mom. I remember him beating our pet Labrador in the head with a shovel because he got in the way. I remember feeling like I was somehow always in the way.

I remember being hungry and afraid to eat because I knew I would get in trouble for it. I remember living in a shack with no plumbing or heat because he was out spending all of his money on his girlfriend, his guns, and his car.

I remember him grabbing me by the hair and yanking me out of the chair. I remember him throwing me to the floor, and I remember the shoe smashing into my groin as I lay on the floor in a ball.

I remember a lot about my stepdad. For all of these years I’ve despised him. Just to hear his name made my jaw tighten and the veins pop out on my forehead. The dream of that teenage boy never went away. I still wished him death and all the misery that could find him between now and then. I remember one of the last times that I saw him: he drove my mom to pick me up from the police station after I had been arrested for robbing a convenience store. He had a look on his face that seemed to say to me, “I told you so.”

That was 1984, and I guess I’m right where he figured I’d be all those years ago. Every day of those 20 years I have had the blackest of hate for him. Even throughout my Buddhist practice when dealing with other sensitive issues I never for a second considered letting go of my anger towards him. I’ve never had an ounce of empathy for him, never a thought of forgiveness.

Not until a couple of months ago. I received a letter from my mom saying my stepdad’s mother had died. My mom had attended the funeral even though she and my stepdad are now separated. She told me how he looked and said that he wasn’t holding up so well. From her description I had a vivid picture of him old, broken, and grief stricken. My stepdad had finally lost.

He finally knew what it felt like to be alone; he finally knew my helplessness. It was time for me to relish a taste of victory. But it didn’t work out that way. His pain didn’t bring me one ounce of joy. Instead, for the first time in my 37 years, I saw that he had feelings. He loved and missed his mother, just as I love and miss mine. I thought of what that must be like. I thought of how devastated I would be if I were to have to walk in those shoes.

At first, that was all I could do. All I had was some empathy. Slowly I began to realize that his suffering had not just started upon his mother’s death. His misery has been with him all long. His anger and his nastiness were byproducts of his unhappiness. He has been running through samsara, trying to do it all his way, just like me. The man I’d become wasn’t really much different from him. My hatred for him had left me bitter about life in general, and because of it, I hurt the ones I loved and those who loved me. Empathy took on a new light. I felt pity, some forgiveness, and maybe a little bit of compassion.

It was all so unexpected to me, I had to go back and rehash a lot of old junk that I really would have rather left in the dark. In doing so I realized I remembered a lot about him but I had only dwelt on the memories that made me a victim. I’m not saying that he was Mr. Nice Guy or that I condone the way he treated me and my mom. I’m just saying that as I reflect about it, there were times when he was really okay.

I remember being in the bicentennial parade dressed as a soldier. He gave me a real rifle to march with. (It wouldn’t shoot, but so what—it was mine.) I remember the pinewood derby car that he helped me build. (He did most of the work. I was fairly inept at being a craftsman. Still am.) Man, that car would go. I remember us going to the beach with the metal detector and digging for buried treasure in the sand. I remember us making those old reel-to-reel home movies on his camera. I remember the day that we went and picked up that Labrador puppy and how that puppy became my refuge during tough times. I remember that bicycle that he made me out of old spare parts. It was the coolest bike in the neighborhood (until I wrecked it). I remember how I used to steal his cigarettes and try to smoke (so I could be cool like him). I remember he would sometimes let me steer the car when we were driving down the road. I remember how he always smelled good, a mixture of musky cologne and Marlboros.

I remember a lot of things. I’m just starting to realize that they weren’t all bad. I spent so many years remembering the pain that I never thought to remember the joy. This path that I’m on never ceases to surprise me. Just when I feel like I am going nowhere something happens to make me realize just how far I’ve come.

He’s an old man now. Yesterday I heard a song on the radio called “Live Like I’m Dying.” It made me sad because I realized that more than likely he’s going to die like he lived. For the first time I wish him well, I offer him forgiveness, and I pray that he’ll find peace.