On her visit to Singapore in April 2006, Venerable Thubten Chodron chatted with Jeffrey Po about various topics, including inter-religious dialogue and how humankind can be united through correct understanding of religion.

Jeffrey Po (JP): Venerable Chodron, good morning to you. You have kept monastic vows for the past 29 years. Do you have any regrets? 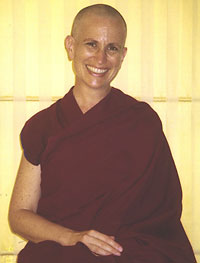 Venerable Thubten Chodron (VTC): No, not at all. I think being ordained and living the monastic life has been the best thing I have done. I feel very fortunate to have been able to become a monastic and train in the precepts that the Buddha established. All that I have done that is constructive has been done since I have become a monastic. So I have no regrets at all.

JP: In an article you wrote in the book Encounter with Buddhism, you said that all religions are designed to foster ethical conduct and the bonds of love amongst humans. However, today this idealism seems far from being actualized. What are your comments?

VTC: While the teachings of a religion may be beneficial, in general the people who practice that religion are imperfect human beings. Religious institutions are made and operated by these imperfect human beings, so naturally problems will exist. Thus someone may ignorantly take a religion and make it into an “…ism”, a dogma, and then use it to create an identity for themselves. Becoming attached to this, they use religion to reinforce rather than to diminish their ego. This has nothing to do with the pure teachings of the religion. Similarly, if people use religion to create rivalry or an ambience of “I versus them,” they have not really understood the principles of their own religion very well. All founders of great faiths talk about the importance having mutual respect and kindness towards all others. It is up to us as followers to train our minds and hearts so that we create harmony with others.

JP: Could you suggest a remedy to this situation of people using religion to create rivalry or discord?

VTC: If this is due to a lack of understanding the teachings of the person’s own religion, the remedy is to understand those teachings properly. This depends on studying the scriptures with reliable teachers of their own tradition. Reliable teachers are those who put the teachings into practice and who don’t allow selfishness to run their lives. Transforming our minds through practice takes time, so we must train our minds and hearts consistently, diligently, and with patience.

What is inter-religious dialogue and why is it important?

JP: I have read in your website about your interest in inter-religious dialogues. Do you see this as something meaningful?

VTC: Yes, I think inter-religious dialogue is very important. It involves learning about other religions and encouraging people from various religions to talk together and to get to know each other as human beings. In this way we come to see that all of us have similar aims, even though our philosophies or rituals may differ. The purpose of interfaith dialogue is not to agree on various theories but to be open to learn about each other based on accurate information instead of rumors and misinformation that has been passed down from generation to generation. Learning how others practice can also help us in our own practice. For example, during some interfaith gatherings, I’ve been asked to teach meditation to Christians. I’ve explained methods to work with anger and to develop equanimity, love, compassion, and joy. People have understood and been appreciative of this and have used it in their own spiritual practice.

JP: During inter-religious dialogue, do you think it can be appropriate to discuss and talk openly about the deeper and more sensitive aspects of beliefs, such as rebirth, God, or Allah?

VTC: I think it depends on the people. If they are willing and open-minded, learning about each others’ beliefs can be beneficial. Learning about others’ beliefs should not involve debating and contesting them, but simply learning how other people think. However, I have found it more valuable in interfaith gatherings to talk about practice and how we live our religious values in daily life. This type of discussion is more personal and enables people to be supportive of each other’s practice.

Is the Internet good or bad?

JP: Venerable, do you think the vast amount of information related to Buddhism that is readily available in the Internet today may confuse rather than aid the less critical Internet user?

VTC: I hope that people who use the Internet have some wisdom and are able to think critically. They should research the qualifications of teachers whose teachings are posted on a website. Does that teacher keep good ethical conduct? Have they studied and practiced the Buddhadharma extensively? Are they humble? They should check if the teachings accord with the general teachings of the Buddha.

JP: Could you offer some comments concerning counseling services for prison inmates?

VTC: I value the work I do for prisoners a lot. I never thought of working with prisoners but they wrote to me and requested help. Writing to and talking with them has enabled me to see them as individuals and to look beyond the negative labels that society puts on them. Some of the inmates appreciate the Dharma more than people outside prison. Because they have “hit bottom,” the Dharma has become very valuable to them and they practice well. It is very moving to witness the transformation taking place in many of the inmates as they learn and apply the Buddha’s teachings to their lives.

JP: Buddhism seems to appeal to older people. How do we attract the younger generation?

VTC: I don’t see Buddhism as appealing to older people. Here in Singapore many young people come to teachings. They want to learn about and understand Buddhism. I have heard people compare Buddhism with Christianity, saying that youth are attracted to Christianity because churches have many social functions. If those people prefer parties, barbecues and socials, let them do what they want to do. The purpose of a Buddhist temple is different. It is not just about having social activities. It is to show people the way out of suffering, to teach them the path to genuine happiness.