You are here: Home > Practical Buddhism > Buddhism in Daily Life > Sickness and Death > Grief > When our spiritual mentors pass away
By Venerable Thubten Chodron on Sep 25, 2005 in Grief

Hello my dear Chodron! While this is New Year, it is not a really happy occasion for me this year. My beloved spiritual mentor, the lighthouse who has been guiding my existence through the turbulent waters of life passed away quite unexpectedly and suddenly. I rushed to India immediately to be here in time for the ceremonies. It was a huge shock for me that I’m slowly overcoming with the help of being with my spiritual family and sharing this deep mourning together. The mourning for a guru is somehow similar to losing a parent, but also different.

Awareness of thought and emotions is quite acute. There are moments of deep pain, those moments when I’m connected with the loss. Then come other moments—more and more of them as time passes and the wound heals—in which I connect with the incredible gifts I have received, moments in which I become aware of how incredibly lucky I am to have had the opportunity of meeting such an incredible, singular, exemplary being, who was so full of integrity, so full of everything I want to be. And not only to have met him, but to have had his guidance during twelve years of my life! Twelve years in which he changed and improved my life completely and deeply, in which he taught me so much! When I connect with this, my heart fills with immense gratitude, and then the tears change their taste and become sweet, blending with a smile.

Right now is the time to live these emotions and reflections, to let them take shape so that this loss becomes a learning and a growth instead of a depression and a sinking. So that I can go on living the way he taught us—being real and honest with myself and others, and living life with all its intensity, learning from every experience and event.

Sending you much love,
Suzie

I’m so sorry to hear that your guru died unexpectedly. He is giving you another important teaching about the impermanence of life and the importance of practicing now so that we will be prepared for our death, which could come just as unexpectedly. Actually, most people don’t expect to die—at least not today—even those who are terminally ill in the hospital. We always think death will come after some time, not today. How foolish we are! 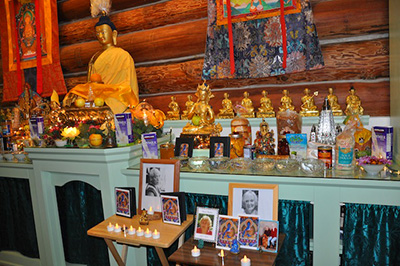 When our gurus pass away, they give us an important teaching about the impermanence of life and the importance of practicing now so that we will be prepared for our own death.

Some of my very dear gurus have died, and it is difficult to accept that they will no longer be here to guide us. When Geshe Ngawang Dhargye died, I was leading a retreat. I cried and cried, but most of the tears were from gratitude for all that he had given me over many years. It was so amazing that I met him and that there had been the opportunity to study with him and receive his guidance. How was it possible that someone like me, with such an unsubdued mind, could meet him? So amazing; it was hard to believe. So most of the tears were of amazement and appreciation for his compassionate and wise guidance.

I was with him the day that Trijang Rinpoche, one of his principal teachers, died in 1981. Geshe-la had been teaching a small group of us privately in the afternoon for a number of weeks. We were due to have class that day when we received word of Trijang Rinpoche’s passing. Most of us thought that Geshe-la would cancel class, but no, he taught all afternoon anyway. And he was radiant. It was like his faith and his confidence in his guru and in the Dharma was illuminating him from the inside out. It made me think. I realized that by teaching us, he was doing what his guru most wanted—benefiting sentient beings. So in his grief, his heart was one with his guru’s heart, full of bodhicitta.

His example stuck in my mind, so when my gurus have passed away, I have said to myself, "They are not here, so now I have to step up to the plate and do their work. It’s my responsibility to benefit others, because that’s what they spent their life doing and that’s what they want me to do." That gave me a lot of courage and purpose and kept me from sitting in my own feelings of loss. So even though I cried at the retreat when he died, I kept leading the retreat. I think some of the people at the retreat were surprised at my tears; they had never had a close relationship with a guru before and didn’t know what it was like.

It’s good that you’re with your spiritual community. You are like brothers and sisters who share the same love for your guru. So it’s important that you take care of each other and are kind to each other.

Losing a dear one who was young