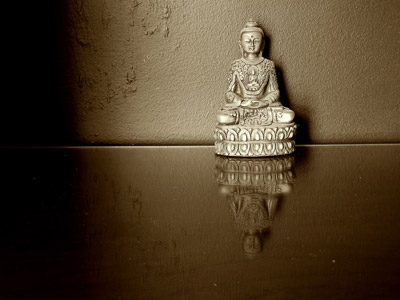 I was touched as these were things he probably would have liked to keep for his own practice, yet he offered them to me. (Photo by Chris Preen)

Venerable Robina Courtin, the director of Liberation Prison Project, and I have discussed the sincerity of Dharma practice expressed by our inmate students. They understand at a deep level what Dharma practice is about. Through reflecting on their lives, they have understood some basic Buddhist premises that are essential for successful spiritual practice. First, our minds—our moods and our motivations—create our experience of the world. Second, our actions (karma) bring results. Third, we are responsible for our actions and experiences. As a result, these inmates have heartfelt devotion to the Three Jewels—the Buddha, Dharma, and Sangha. This devotion was demonstrated in a powerful, yet simple way earlier this month (June 2004), when Sravasti Abbey filled and consecrated a large Buddha statue. Cast in bronze, the statue was to be filled according to Tibetan tradition, with mantras written on sheets of paper that were rolled into cylinders. Incense, relics, precious objects, and Buddhist images would also be placed inside before the statue was sealed and consecrated.

Before they even knew about the statue, I received unexpected gifts from two inmates. A man in Missouri sent me a silk kata—a traditional white offering scarf used by Tibetans—and a small Buddha statue. I knew it was hard for him to get those because prison authorities are extremely strict about what is allowed into prisons. I was touched as these were things he probably would have liked to keep for his own practice, yet he offered them to me. An inmate in Texas sent a Dharma wheel made of colorful knotted cord. This, too, was special because he had been in Ad. Seg. (administrative segregation or solitary confinement) for a few years and surely valued a colorful religious object in his dreary environment. I resolved to put these gifts inside the Abbey’s new Buddha statue.

Inspired by their generosity, I thought to tell other inmates about the statue, since some of them may wish to contribute items to put inside. This was a way through which these practitioners could make a strong connection with the Three Jewels and the Abbey as well as create great positive potential by making offerings. So Jack, the Abbey’s secretary, sent out a letter inviting contributions from the other inmates with whom I correspond.

Their response was overwhelming. Every person contributed something. A few of them told their friends who were also incarcerated, and they sent objects as well. They offered Buddha images, hand-written mantras and prayers, Dharma texts, prayer beads, incense, Buddhist pendants, an ink drawing of Chenrezig, a braided refuge bracelet, and a handkerchief kata. For people who are incarcerated and lack access to religious items, these objects are dearly cherished. Yet each person who contributed thanked us for giving them this opportunity to give!

Prison circumstances in the U.S. are such that many Buddhist inmates have difficulty receiving religious objects and teachings that those of us on the outside take for granted. There are several reasons for this difficulty. The Department of Corrections in some states do not allow Buddhist inmates to meet together as a group. They say either that there are no Buddhist volunteers to lead a group or not enough prisoners to form one. Thus the only access to teachings Buddhist inmates in those states have is books and in a few cases, audio tapes. They are allowed to have personal religious objects, but only those acceptable to the authorities. For example, only plastic Buddha statues are allowed in some prisons, and audio tapes must not have screws.

Inmates face several difficulties in procuring these items. Most inmates have very little money. Prison wages are generally in the range of $0.50 an hour, unless an outside business employs prison labor, in which case it is higher. Often a percentage of this is garnished to pay for their room and board in prison.

Ordering and receiving religious items is challenging. Once an inmate asked me for a mala—Buddhist prayer beads. I had to make two phone calls to the chaplain, the inmate had to fill out a request, the chaplain had to inform the mail room, the prayer beads had to be strung on cotton string and could be made of only certain materials. When they arrived, the mail room had to tell the chaplain, who would pick them up if everything was according to specification. Then, whenever the chaplain had time, he would give them to the inmate.

Some chaplains are resistant to Buddhist inmates’ requests for materials, and some mailroom clerks create obstacles as well. Some states require that Dharma books be sent directly from publishers. Most do not allow hardcover books. Pictures are easier to send, but they must be unlaminated and not larger than a certain size. If an allowable item is mailed in a padded envelope or bubble wrap, prison authorities return it to the sender.

Thus, Buddhist inmates need great perseverance to receive the teachings and religious objects that are readily accessible on the outside. When they are able to receive teachings, or even practice together as a group, they value the opportunity. When a Buddhist inmate has an item, he or she cherishes it.

What especially touched me was not only that the inmate practitioners gave of the little that they did have, but also that they thanked us for the opportunity to give. This is real Dharma practice. So that you’ll hear their sentiments in their own words, here are a few of their comments:

LB: “Unfortunately I have been removed from the unit I was in, and all of what little property I had has been taken from me. However, I have removed the braided precepts bracelet I made (when I took refuge and the five precepts) from my wrist and tied it with a yellow ribbon. Will you accept this please as my gift to fill the Buddha? It is pretty primitive, but I chanted om mani padme hum with every twist of the cord, so I know it is loaded with lots of positive potential.”

DD: “Thank you so much for this kind offer and your thoughtfulness. What a wonderful opportunity to create merit and establish a deeper connection with Sravasti Abbey and the Three Jewels. I’m sending a Buddha image that you gave me quite some time ago. I’ve used it many times in my prayers and meditations. On the back, I copied a dedication from The Extraordinary Aspiration of Samanthabhadra. Please inform me of any future opportunities to make offerings.”

JB: “I received your letter with the invitation to offer. I am deeply humbled to even get a letter of this nature and can only hope that my meager offering of a drawing I made of Chenrezig, the Buddha of Compassion, will benefit all sentient beings in some way. Please accept my deep and heartfelt thanks for allowing me the opportunity to make an offering at this very special event.”

GS: “Thank you so much for allowing me this wonderful and auspicious opportunity of contributing and further solidifying my karmic connection with the Abbey and with my teacher. Enclosed are the Dhammapada, a Buddha pendant, and a mala. I have had all three for many years and they are very dear to me. Thus I am honored and humbled to be able to contribute these for the consecration of the Buddha statue.”

RS: “Thank you for the offer enabling me to make a strong karmic connection to the Three Jewels. Enclosed are a picture and some incense. It isn’t much, but I pray it will be of benefit. Please let me know of any other similar activities taking place at Sravasti Abbey.”

Sravasti Abbey’s Buddha statue was filled and consecrated in June, 2004. Supported by the positive aspirations of many people, it is now an object that will stimulate more positive aspirations in those who see it and who meditate in its presence for generations to come. Whether we are inside or outside of society’s prison, we are all imprisoned by our ignorance, anger, and clinging attachment. Through the heartfelt contributions to the Three Jewels given by Buddhist inmates and others, may all sentient beings be free from suffering, abide in peace, and share our compassion with others.

Photos of the consecration are available at SravastiAbbey.org.