You are here: Home > Practical Buddhism > Prison Dharma > By Incarcerated People > On Mindfulness > Beauty and the bugs
By L. B. on May 10, 2004 in On Mindfulness

Today has been a day of wonder and eye-opening realization that love and beauty can and do exist even in the darkest of places and circumstances.

I woke up this morning as I have every morning for the better part 26 years—in prison. Prison is home now, I admit that. I do not mourn that fact, it simply is. Yet what is not usual is the way my morning has unfolded and the feelings and energy that surround me. It was as if the universe were saying just to me, “I see you and I cherish you!”

When I woke, I did not want to get out of bed or partake of the half hour of rec period that is granted us five days a week. I did however push myself to go and walk off the cobwebs of a lousy night’s sleep and shave the three days’ growth of whiskers off my face. My Dharma teacher was coming this morning, and I did not want to look as bad as I felt.

Once the guards led me through the rec yard door and into the 30’ x 12’ dog run we call a “yard,” it seemed that the entire world (or at least my little part of it) had changed into a wonderful twilight zone created by loving kindness. Normally the little rec yard where I reside in the intense management unit for unruly prisoners is devoid of life, cluttered with dust, old fingernail clippings and bits of paper disposed of by the numerous men who use it to pace off their frustration or to get away from the daily smell of men who live cramped too close together.

But today was different: the first thing that I noticed was a small, black, water bug racing along one wall. The bug was definitely looking for someplace to hide, but like bugs do, he was turning about, then racing the other way and not getting far in any direction, even though he thought he was. I greeted him and smiled, reminding myself that I would need to keep an eye on him so that I would not inadvertently step on him as I paced the area.

I was starting to feel the atmosphere of the new morning and glanced up over my head where a portion of the rec area has been left open to the sky, covered only by a few bars and large knuckle wire. The sky was cobalt blue, deep as the sky gets on cloudless summer days, reflecting the ocean’s clarity and immensity all at the same time. What a beautiful day, I thought, and breathed deep of the fresh air. 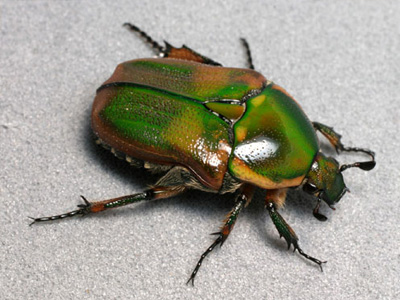 Opening up to what surrounds us brings opportunities to learn and grow. (Photo by Patrick Coin)

As I began to turn to head the other way and resume my pacing, I came face to face with one of the largest flying beetles I had ever seen. At first I was startled by the sight. I am used to seeing a glob of spit or an old spider web when I make that turn along the wall. Then I reached out my finger in greeting and said, “Hello, little brother!” The beetle wiggled his inch-long antennae as if to say, “Stay away!” but did not fly off as I had half expected it to.

I looked at him, or her—I really can’t tell a male flying beetle from a female one—and it was a pretty thing. The beetle was approximately two-and-a-half inches long, and about one-half inch wide. Its head tapered to a set of antennae that seemed to have little bristles on them. The carapace was a glossy black and you could see its wings sticking out a little in the back. Again I smiled and continued pacing.

As I made my second round past the water bug, who was now making a beeline toward the red gym shorts that I had tossed with some laundry in one corner, I noticed movement on the ground by my feet. When I looked closer, I noticed that it was a wasp, in a stupor as it slowly awakened to the morning.

Personally I don’t care for bees or wasps. I remember as a child how much pain and torment my mom went through because of them. I also didn’t want to get stung by them, but this one was right in the middle of the path where I was walking and I already had to keep an eye on the water bug and the beetle. I would have to do something if I wanted to continue my morning walk and keep from stepping on these beings.

I bent down to the water bug and gently coaxed it into the palm of my hand, then carried him over to the water runoff drain. As soon as I set him down he rushed into the darkened drain and settled down into one of the drain’s cover slats. I knew that he would not be moving for a while. Next, I went to my pile of dirty laundry and took out an old sock. I walked down to the wasp and tried to gently push her into a corner of the rec yard. She was slow-moving at first, but after five or six prompts with my sock on her back side, she was headed in the right direction though she was trying to sting that smelly old sock with each push. Finally I got her into a corner and she went back to waiting for the day to warm up. But she kept an eye on me; I would see her little head moving back and forth each time I walked by.

For the next 25 minutes I walked up and down that dog run, reflecting on the beauty that had entered my life in that moment. A lot of us just go about our day enduring, yet blind to our surroundings. For many of us this is a survival tactic that helps keep the intense and usually negative emotions at bay. I understand why it is done, yet I am finding that the more I open myself up to what surrounds me (even if it is negative), the more I can find beauty in it and learn something from it.

Today I was able to see fellow creatures striving to live and grow. They asked nothing from me, but shared the awareness that I exist with them in their moment. I smiled to the blue sky, to the bugs and to myself—seeing, feeling, existing without harming. This is enough for me right now and I am grateful.